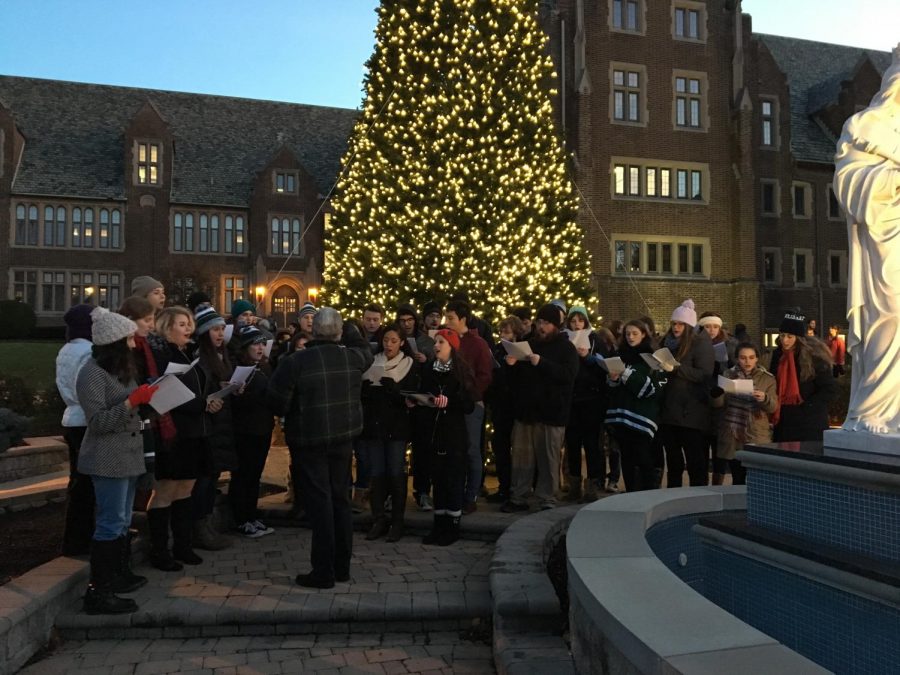 The Concert Choir, under the baton of Thomas Brooks, performs at the tree-lighting ceremony.

The long-standing tradition of the Mercyhurst University Concert Choir’s special Christmas concert at Mercyhurst North East always is a sign of the beginning of the Christmas season.
The choir will be traveling to North East to perform in St. Mary’s Chapel on Dec. 13 at 7 p.m. The concert is free and open to the public.
This year, the choir is under the direction of Thomas Brooks, who is excited to showcase the progress of the choir has made this year.
“I am excited and looking forward to this concert,” said Brooks. “We have already done good things this year, but this is another opportunity for us to work together and be proud that we accomplished something big.”
The choir will be performing Guillaume Dufay’s “Gloria,” John Gardner’s “Tomorrow shall be my dancing day,” Vivaldi’s “Gloria,” “Jingle Bells” and a sing-a-long of other traditional Christmas carols.
This will be the first year that the Mercyhurst Civic Orchestra will be joining the choir at North East.
A reduced orchestra will be accompanying the choir on Vivaldi’s “Gloria,” conducted by Brooks.
The other pieces will be accompanied on piano.
“We are happy to accompany for this piece at North East,” said Orchestra director Jonathan Moser.
“It has been a joy getting the music ready.”
Brooks changed the originally intended Handel’s “Messiah” to Vivaldi’s “Gloria” for the Christmas concert because he felt it was a better fit for the choir, along with having a similar instrumentation as “Messiah” for the orchestra.
“Vivaldi is an interesting piece. It is done often and is very well known,” said Brooks. “It is a good training piece for us because the ranges are reasonable. You want to pick something your group is going to be best at.”
Brooks will be conducting the orchestra for the Vivaldi “Gloria” at North East.
“I am very excited to collaborate with the choir and to have the orchestra also be represented at the North East concert,” said Moser.
The concert is a favorite among the members of the choir every year.
“I have sung at the North East Christmas concert two times before, and it’s always a pleasure to be part of an ensemble that spreads the joy of music to others,” said senior Music Performance major Jake Shearer.
Beyond the Christmas concert at North East, Brooks has big plans for the choir in the coming years.
“We should always be looking to improve. When a group of talented people get together with that attitude, it makes a world of difference,” said Brooks.
“That is what I want this choir to be known for—excellence and commitment,” he said.
The concert will surely showcase an evening of talented students that is sure to bring some holiday cheer.