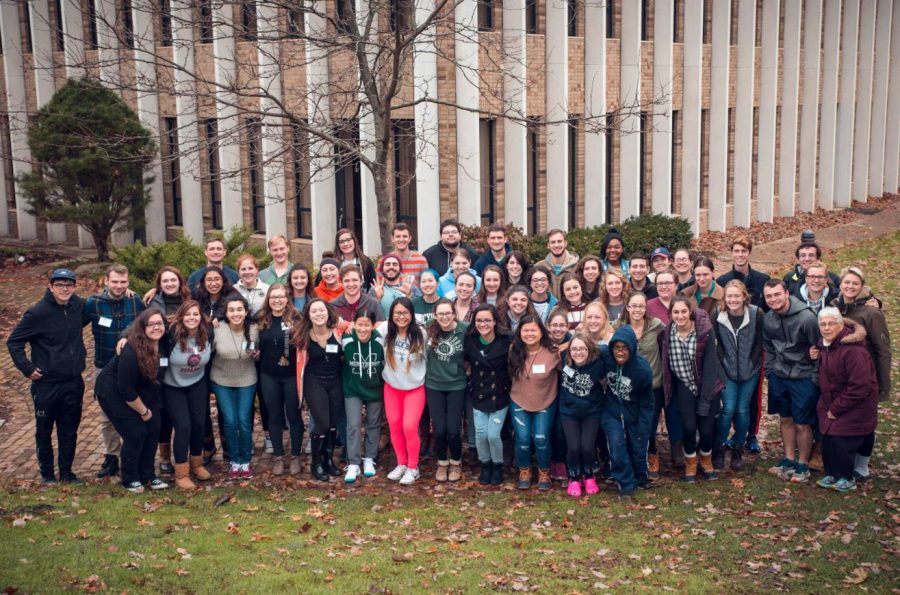 Students stayed at the Villa Maria Retreat Center for a weekend to participate in Carpe Diem 9.

One of the most popular Campus Ministry events that is put on twice a year is also its most mysterious — the Carpe Diem Retreats. Carpe Diem 9 (CD9) was held the weekend before Thanksgiving, Nov. 17-19, at Villa Maria Retreat Center in Villa Maria, Pa.

Each Carpe Diem getaway has a different team of student leaders who have already participated in the retreat. That team takes the lead on the planning process.

“From the beginning, the Carpe Diem retreats have been student led,” said Greg Baker, Ph.D., director of Campus Ministry. “Jenell (Patton) and I just walk alongside. It is led by the students’ stories, lives and how they are personally living the spiritual life.”

A total of 42 retreatants, of varying years and majors, attended CD9. Many of those students were both excited and nervous before attending the retreat.

“I am sort of nervous, mostly about the timing of the retreat because I have a lot of outstanding homework to do,” said Will Fistek, junior English major. “Based from my understanding, CD9 will be similar to the Kairos retreats that I went on in high school, and I really enjoyed participating in and leading those retreats. I would like to experience another similar retreat this weekend.”

Even though it is one whole weekend away from campus with little time for homework, many believe that it will be time well spent.

“I don’t know what to expect, but I am excited to make new friends,” said Abby Whitman, sophomore Music Therapy major. “I am nervous because you don’t know what is going to happen. All I know is that it is really fun and I have only heard good things from my friends.”

Those that have attended previous CD retreats have many different positive responses.

“My experience on the CD retreat was one of the best I’ve had at Mercyhurst so far,” said Julia Vicaretti, junior Public Health major who was a CD7 retreatant and who will be a CD10 leader. “CD means so much to me. It’s all about community, love and respect.”

Planning for such a large and impactful retreat takes a lot of preparation from the team. The leaders begin meeting about a year before the retreat and have weekly meetings as the date draws closer.

“I almost didn’t get on the bus for CD7 because I was so scared. But I made lots of friends and I am glad I went,” said Chontos. “Once I found out exactly what this retreat was about, I wanted to share my story and apply to be a leader to let people know that they aren’t alone.”

Beyond making close friends over a short weekend, Carpe Diem is about growing in one’s spiritual life and reflecting on their own personal lives as well.

“Carpe Diem was a very tolerant space that allows students to expand beyond their comfort zone,” said Luis Flores, sophomore Economics and History double major and CD8 retreatant. “Whether a student is seeking to grow spiritually, socially or on a personal level, CD retreats are the way to go.”

The power of this retreat has shown the Campus Ministry team how important it is to continue in the coming years.

“It is the best thing we have going on in Campus Ministry,” said Baker. “Carpe Diem has moved people in so many ways; it has kept students from transferring out of Mercyhurst, brought them back to their faith, given them a close community and inspired them to share this experience with others.”

Leaders for Carpe Diem 10 are already planning and excited for more students to experience the retreat in the spring.

“I’m excited to not only experience it all for a second time, but also to share that experience with so many new people,” said Vicaretti. “The leaders are there to create a relaxing and welcoming environment once you arrive, so before long your anxieties will go away. It’s a great way to make Hurst feel like home.”