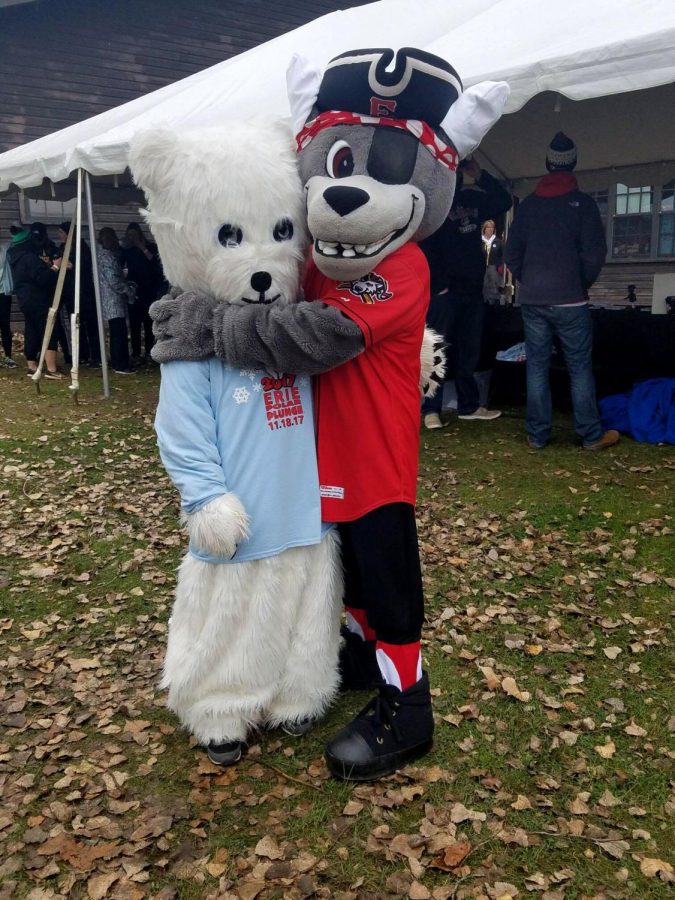 On Nov. 18, more than 100 Mercyhurst students, faculty and staff in various teams dove into the brisk waters of Lake Erie to participate in the Erie Polar Plunge. A total of over $11,000 was raised by the Mercyhurst teams to benefit Special Olympics of Pennsylvania.

This was the third annual plunge for SOPA. Special Olympics is a worldwide organization for people with intellectual disabilities to train and compete in Olympic type sports. The organization has programs where children and adults can participate. The money raised benefits the Pennsylvania chapter, so athletes can train and compete free of charge.

“Organizing a team for this event in the Education department does not prove to be challenging. Many of the students and professors love getting involved and raising money,” said Deighan. “I think we all have similar reasons for plunging and know just how much the money we raise impacts the athletes.”

This year’s Erie Polar Plunge saw over 700 participants enter the lake water off Presque Isle State Park. To participate in the plunge, one must raise a minimum of $50. The participant can dip their toes in the water or swim all the way out to the lifeguards on duty.

Maddie Castele, senior Public Health major, did not know what to expect, as it was her first time participating in the plunge.

“You swim out to the lifeguards and can high five them before swimming back,” said Castele. “The water went all the way up to my neck and I could barely touch (the bottom).”

While the participants were jumping into the lake, others were listening to live music, watching ice carvers and keeping warm with coffee and hot chocolate.

Taylor Balser, senior Early Childhood Education and Special Education major, was the biggest fundraiser for the Education department. This is her second year participating in the plunge, and through a lot of emailing, networking and talking with friends and family, she helped raise $1,549.

“It’s truly such a special atmosphere to be part of because everyone is so excited and happy, and it adds to the whole event,” said Balser. “I have been lucky enough to be a buddy at Special Olympics for the past two years and it’s such an amazing experience and I’m glad I can help raise money for it.”

Many Mercyhurst students who participated in this year’s Polar Plunge encourage everyone to participate in the event next year.

“I love working with those with disabilities, and being able to give something back to them after they have given so much to me is the best part,” Deighan said