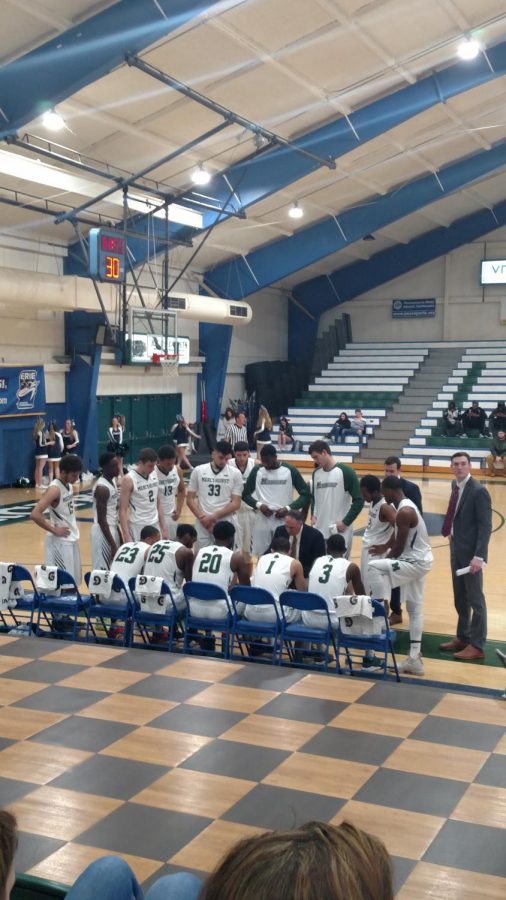 The Lakers huddle for a timeout. Monday’s 30-point blowout against Roberts Wesleyan lifted the Lakers to a 4-1 record for the season.

The Mercyhurst men’s basketball team increased its record to 4-1 with a 81-51 win against the previously unbeaten Roberts Wesleyan College Red Hawks on Nov. 27.  The Red Hawks on paper were going to be a tough opponent.

“They were a 6-0 team,” said Laker junior Patrick Smith. “Definitely a tough team, but we came out with the win.”

That they did. The Lakers took the lead 2-0 early in the game, but soon after Roberts Wesleyan took the lead, 4-2.

However, this would be the only point in the game where Roberts ever had the lead.  Soon after, Smith scored a 3-pointer for the Lakers.  The Lakers maintained this lead all throughout the first half, finishing the half with a score of 39-18.

“We played well as a team,” said freshman Derrick Ellis Jr. “We played well on defense in the first half.”   Head coach Gary Manchel was pleased as well.  “I thought defensively we played well throughout the game,” he said.

It was a strong showing for the Lakers, whose next home game will be on Dec. 16. against Notre Dame of Ohio.