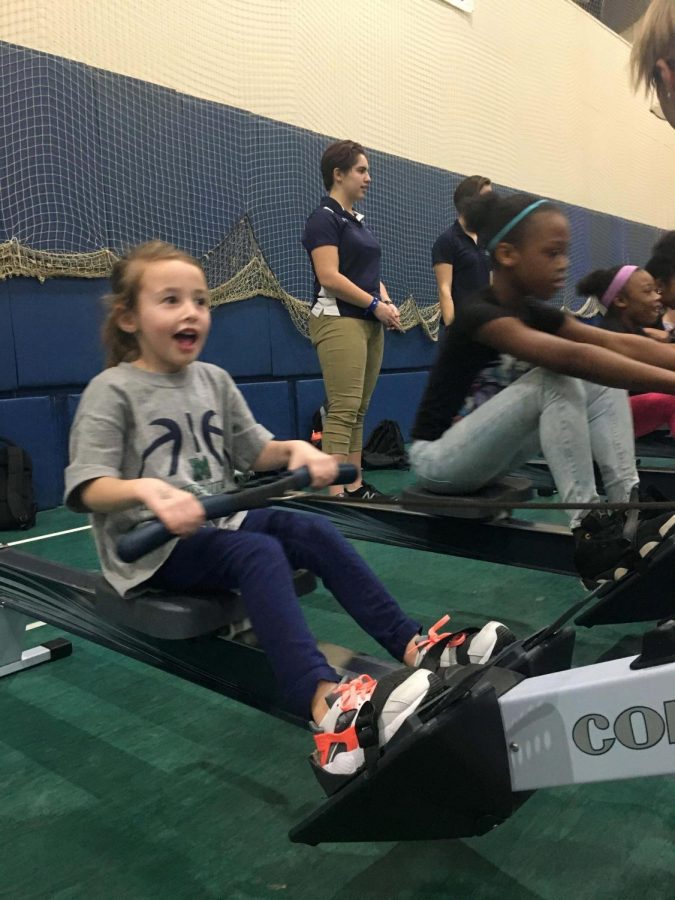 National Girls and Women in Sports Day (GWSD) is a nationwide initiative, celebrating the achievements of women in sports and encouraging younger girls to follow their example by getting involved in athletic activities. This year marked the 32nd national anniversary of the day and its seventh year at Mercyhurst.

On Jan. 28, the women’s sports teams hosted the event in the REC Center, inviting 150 girls, grades K-8, to take part in sports activities along with 120 female athletes. Afterwards, they were served pizza and watched the women’s basketball team compete.

The event began in 2012 when Mercyhurst invited 30 young girls to participate. The event has expanded each year since. The girls can try out all the sports that Mercyhurst offers, with interactive stations run by student athletes.

The current Laker sports teams see the event as a way to build the female athletes of the future and to give young girls the confidence to consider a sporting career.

Bethany Brun, coordinator of Service Learning, was integral in helping Mercyhurst to cement its GWSD. She sees it as one of the most basic and helpful ways for girls and women to celebrate the positive influence athletic participation brings to their lives.

“On a personal level, this event is my baby,” said Brun. “When I was in sixth grade, I attended a GWSD at the University of Dayton in Ohio and tried all the sports. I ended up rowing the fastest time of anyone that day, and rowed all throughout high school. My senior year, I received a scholarship to Mercyhurst to row, and I’ve never left.”

Making a personal connection with a sport can open more academic options.

“My hope with this event is that it sparks something inside another girl and she sticks with it, to the degree that it helps her achieve academic success through the medium of athletics,” Brun said.

Communities across the country will be hosting events this month in conjunction with the GWSD celebrations. The official day is Feb. 7, and the theme of the 2018 program is “Play Fair, Play IX.”

This celebrates the Title IX legislation that ensures educational opportunities free from sex-based discrimination, and the expansion of opportunities for female athletes.

The athletic departments of colleges and schools across the country can demonstrate the courage, confidence and character gained through sports participation and team play.

Emma Farrell, a freshman on the rowing team, helped teach the participants how to row.

“I think it was really great for younger girls to see older girls accomplishing their goals and being active,” said Farrell. “I wish I would have had something like this when I was younger because there was a stigma that only boys could be tough and participate in sports, which made it hard for me as a girl who loves to be active. However, this stigma is slowly disappearing. It’s an empowering thing for young girls to gain more confidence in themselves.”

As well as the rowing team, athletes from lacrosse, cross country, soccer and basketball teams, among others, took part. There were free giveaways, drill stations and opportunities for the K-8 girls to learn about nutrition.

Anna Warner, junior double major in Sports Medicine and Exercise Science, has helped with GWSD for the past three years. She is also a member of the cross country team.

“I really enjoy showing young girls that sport is about more than just succeeding,” said Warner. “It’s about becoming the best person you can be by building your character and work ethic. Even if it hurts, you push through and it pays off in the end. That’s what I love about running. There is nothing more healthy and rewarding both mentally and physically. It’s something really special to share with the little ones.”