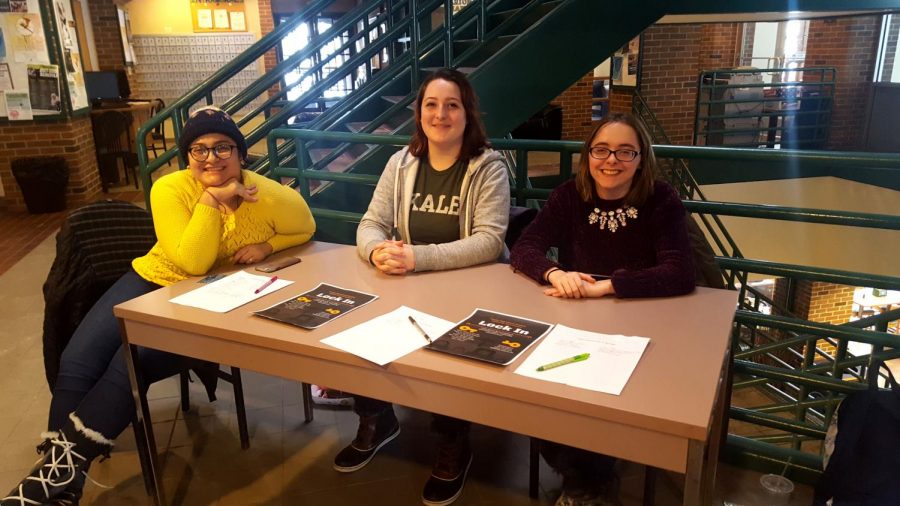 Leaders Maria Montoya, left, Julia Lesko, center, and Allie Schweiger, along with others, have been hard at work advertising for and planning this year’s Lock-In.

Where else can you do karaoke, watch movies and have a slumber party, all while keeping in touch with your Catholic faith? On Feb. 16 at the Student Union, students can play games and participate in spiritual activities at the Lock-In sponsored by the Tuesday Night Catholic Devotions group.

Tuesday Night Catholic Devotions is a religious group on campus that meets every Tuesday night at 8:30 p.m. to explore the Catholic tradition and provide members with the opportunity to deepen their faith. As a group, they practice devotions such as the rosary, chaplets and Eucharistic Adoration. Some nights they have speakers come who share with them their journey through service, hopelessness, success and failure through life.

This is the second year the Tuesday Night Catholic Devotions team is sponsoring the Lock-In. The group plans on keeping it a yearly event, unless there is more demand for it.
Interested students are encouraged to sign up for the Lock-In ahead of time at Campus Ministry. That way they will have all information about the event and can ask the leaders any questions or concerns they have.

Leaders of the team include Nick Woll, sophomore Psychology and Religious Studies double major; Maria Montoya, junior Psychology and Biology double major; Allie Schweiger, freshman English major; Victoria Schmidt, junior Early Childhood Education and Special Education major; and Julia Lesko, sophomore Business and Communication double major. Any of them can be contacted with questions, either about the Lock-In or other events and meetings.

“The Lock-In is going to be a really fun, faith-filled night,” said Schweiger. “I encourage anyone that is considering it to attend. It’s a great opportunity to make friends and find peace in the midst of our busy lives.”

The leaders have lots of activities planned for the night. After check-in, the leaders will explain the rules for the night. Following that, there will be several fun ice-breakers, allowing the participants to get to know one another.

There will be five different stations placed throughout the Student Union that attendees will be able to go to that incorporate Catholicism. One station will involve the rosary, either making it or praying it. A second station will consist of a guided meditation. There will be a praise and worship station where people can sing songs, and another station will involve spiritual journaling. There will also be a break station available for students who are not Catholic and need a break from the religious activities.

For the remainder of the night, students will be able to relax, watch movies, do karaoke and enjoy different snacks and games. Everyone who attends is welcome to bring their own gaming console or board game to play.

“I enjoyed the Lock-In because it allowed me to spend time with many of my friends that I normally don’t get to hangout with,” said Ryan King, senior Intelligence Studies major. “It also gave me time to get away from the idea that in college, in order to have fun on a weekend, you need to go to a party or be drinking.”

There will also be 24-hour Perpetual Adoration.

“It was a fun night mixed with prayer and games, and a great way to build community and connect with fellow students,” said Harms. “There was a lot of energy and positivity all night long and ended with a delicious breakfast.”

Breakfast in the morning will be provided by the Campus Ministry group MYRACLE.

Woll stressed that students of any faith can attend the Lock-In.

“With it being a Campus Ministry event, it is kind of pegged as a Catholic thing, but you don’t have to be Catholic,” said Woll. “We would appreciate it if people would go through all the stations with us, but it is not going to be faith heavy throughout the night.”

The leaders ask that students who are not Catholic come with a respectful heart and open mind. They encourage everyone’s participation, but there will be alternative activities for those who feel uncomfortable with any of the stations.

“The Lock-In is an amazing opportunity to get to know great people, but most importantly, it is an opportunity to explore your relationship with your faith,” said Montoya. “Activities such as the Lock-In allow people to come back in touch with their faith and with themselves.”