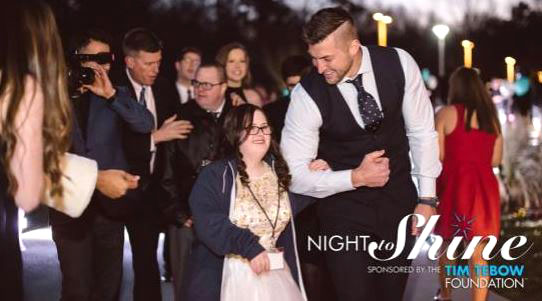 The Tim Tebow Foundation sponsors the Night to Shine, an event that has begun to spread throughout the United States and international community.

Night to Shine is an unforgettable prom night experience centered on God’s love for people with special needs. Sponsored by the Tim Tebow Foundation, the event gives the honored prom guests and their volunteer buddies the opportunity to have a magical prom evening catered to their needs.

As a part of this worldwide movement, more than 500 churches and 175,000 volunteers in 50 states came together on Feb. 9 to celebrate 90,000 honored guests. The Erie Night to Shine event was hosted at St. James Parish and was an unforgettable evening for 100 promgoers and three Mercyhurst buddy volunteers.

Participating as a buddy volunteer involved accompanying and assisting a prom guest for the evening, providing companionship and enthusiasm.

For the Physician Assistant students, service is a daily activity, required by their program and future jobs.

“As part of our program, we participate in service learning hours to give back to the community,” said Kindron. “I began volunteering with the Autism Society this past summer, which is where I heard about Night to Shine. The night was a truly magical one, and seeing the smiles on everyone’s faces throughout the night was so rewarding.”

Every guest of Night to Shine entered on a complimentary red carpet with professional photography, hair and makeup stations, corsages and boutonnieres, shoe shines, a catered dinner and a dance floor inside. The highlight of each Night to Shine is the crowning of every guest as king or queen of prom.

Linda Hennigan, chairwoman of the Erie committee, played a large role in organizing the Erie Night to Shine.

“Guests receive the royal treatment. In addition to the buddy volunteers, there are over 80 volunteers who dedicate their time as greeters and registration team, red carpet and paparazzi team, food service team, and safety, security and medical teams,” Hennigan said.

There were rooms for parents and caretakers even incorporated into the plans, giving guests the ability to leave the festivities momentarily and rest if needed.

“Memories are captured by photographers, and there is a respite room available for the parents and caretakers,” said Hennigan. “The evening concludes with each guest receiving special Night to Shine prom favors including their photo in a commemorative frame.”

The Tim Tebow Foundation, the sponsor of the event, created Night to Shine as a night for churches, volunteers, the honored guests and God to shine. The event has spread throughout the United States and, in recent years, moved beyond national borders. There are now 15 other countries that have become involved. The organizers hope the impact is being felt all around the world.

“The evening was very rewarding, and it was nice to be able to make someone else’s night,” said Shagena.