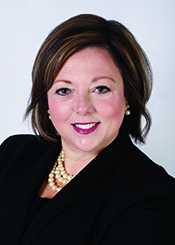 With the recent announcement that David Dausey, Ph.D., will be leaving for a position at Duquesne, the Mercyhurst community had been left wondering who would be fulfilling the position. The answer came Feb. 5 with President Michael T. Victor’s appointment of Leanne Roberts, Ph.D., as provost and vice president of academic affairs.

“We are excited to have Dr. Roberts join our senior administrative team,” said Victor. “She has remained steadfast in her commitment to building strong partnerships within and across the university and community. At every step, Dr. Roberts has demonstrated a strategic capacity, an acumen for leadership and an ability to inspire and deliver excellence.”

Roberts, a graduate of Edinboro University of Pennsylvania, has more than two decades of experience in the field. She obtained her Ph.D. in Education from the University of Akron in 2005, shortly after joining the Mercyhurst community in 2001.

Dausey has a lot of confidence for his successor.

“She did a great job as dean of Hafenmaier College, but I knew she was destined for greater things in terms of leadership. She has the trust and respect of many, and she has earned it, but she is in incredibly energetic leader,” Dausey said.

In her 17 years at Mercyhurst, Roberts has served in a number of positions, including, but not limited to, professor, department chair, associate dean, and dean of the Hafenmaier College of Humanities, Arts, and Social Sciences. She has also served multiple terms on the Faculty Senate Executive Committee.

“Dr. Roberts is definitely the right person for the role. She is a clear leader and has a strong management style,” said Dausey. “She has been at MU long enough to understand how the place works and understands the people.”

In each of her many roles, Roberts has been a highly decorated with awards and recognition both at the school and in the greater community, including Mercyhurst’s Teaching Excellence Award in 2014.

She has served as the Project Director for the million-dollar Links to the Future grant that introduces faculty to the instructional use of technology. She is also the recipient of a $1.5 million 21st Century Community Learning Center grant that allowed her to start the Carpe Diem Academy, an extended learning program for inner-city children.

Her experience both on and off campus have prepared her for this new chapter.

“I am honored to join President Victor and the Mercyhurst University administration,” Roberts said. “Mercyhurst’s commitment to academic excellence and enhanced student learning experiences, supported by a talented and dedicated faculty, align with my commitment to the values of a Mercyhurst education, especially as they fulfill the legacy of our founding Sisters of Mercy.”