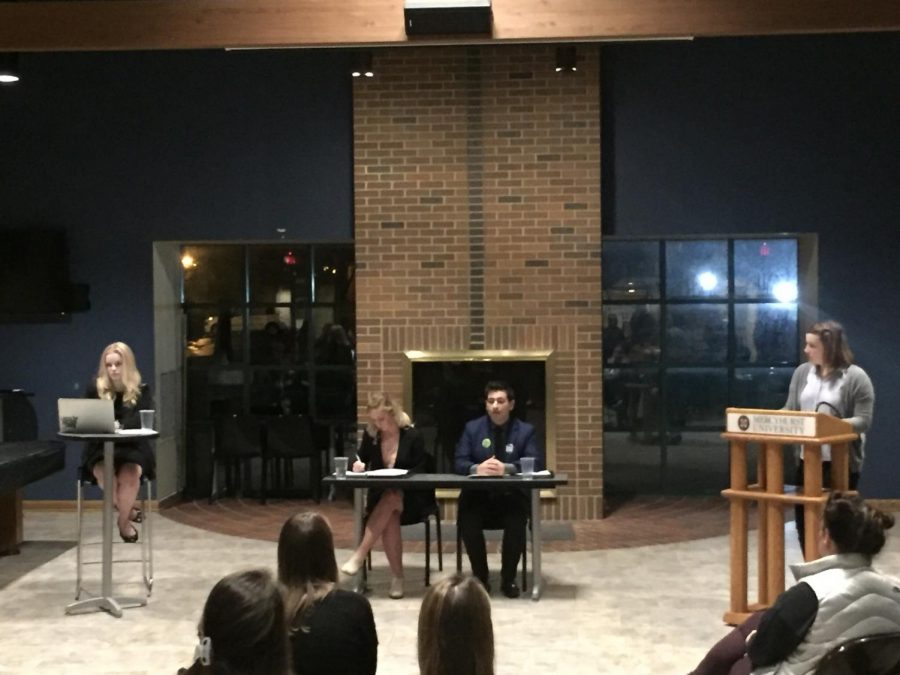 On Feb. 19, Mercyhurst Student Government (MSG) hosted the annual presidential and vice presidential debate for the candidacy of the 2018-19 school year. The event was well attended by interested students looking to meet the potential leaders of their student government.

Each of the candidates had a chance to lay out their platform in an opening statement.

Marrazzo emphasized his extensive experience in MSG and within the Mercyhurst community. Some of his ideas were to work with administration to set a price limit on REACH curriculum textbooks and potentially create a for-credit class designed to help students with post-graduate testing.

“I believe that my experience serving in MSG will assist me as I run for president as I have intimate knowledge of every facet of student government,” said Marrazzo. “I have committed myself to listening to the voices of the students and have tried to find solutions for those problems.”

Gibson’s ideas were focused on the future of Mercyhurst and creating a legacy that included our traditional heritage. She would like to incorporate the voice of the student body more and host a large campuswide activity for St. Patrick’s Day in honor of Mercyhurst’s Irish heritage.

“Even though I am only a sophomore, I believe that I have the experience and drive to become next year’s president,” Gibson said.

Jensen also gave an opening statement laying out her ideas for Mercyhurst to continue to improve inter-departmental communication, become more involved with the Erie collegiate community and focus more funds and support for RSCOs on campus.

“I believe in the power of students coming together to create change,” Jensen said.

From the initial statements, moderator Molly Mills, senior Biology major and Senior Class Senator, began to ask the candidates several questions ranging from how they hope to get students more involved on campus and with MSG to their favorite memories of Mercyhurst.

Gibson emphasized that she wants to make sure all students know that Hurst is Home and that everyone feels that they belong. By promoting constant communication between the MSG senators and the student body, they can promote the school and make change happen.

Marrazzo believes that the Mercyhurst community should always be encouraging and leading students to seize the day and take advantage of everything the school has to offer.

One main issue of the debate was the support for student organizations and clubs and the Student Activities Council/Multicultural Activities Council. Marrazzo wants to allow these clubs more funds and representation. Gibson wants an increase in communication and awareness of the clubs. Gibson and Marrazzo both want more equality between SAC and MAC funding to continue to support the diverse organizations and students on campus.

Both candidates agreed that the voices of the students need to be heard and that they will work hard to find ways to accomplish this.

Marrazzo is very adamant about giving students the ability to choose policies and events that they want to see on campus, as opposed to planning another large event. He hopes to clarify the stigma of what student government is and do so by encouraging the RSCOs and other students to be a part of that change.

Gibson believes that the best way for the student body to be stronger and able to communicate with the students to more effectively create change is transparency and unity within the governing body. Even though members of MSG may disagree at times, promoting working together is key.

As for improvements on campus, both candidates have big plans that directly impact the student body.

Gibson plans to create a partnership with Uber allowing students to use their bonus bucks as payment, similar to plans already implemented at Gannon University. She believes that this resource is more safe, efficient and effective for freshmen and students over 21 going downtown than the Erie public transit.

Marrazzo wants to improve relationships between MSG, students and other contracted services. He wants to make maintenance more efficient and reliable by informing them of the recurring issues in on-campus housing and giving them the ability to handle those problems more effectively.

Elections will begin via email on Feb. 27 at noon, and voting lasts until March 1 at noon.