Quartet performance to be a ‘Turtle’-y big hit 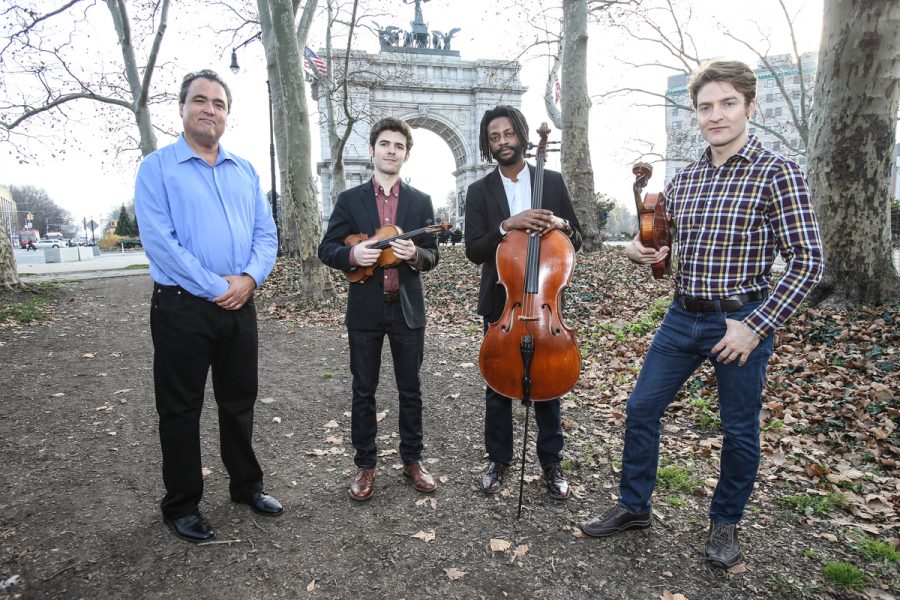 Come out of your shell to catch one of the greatest Mercyhurst Institute of Arts and Culture’s music events of the semester.
The Turtle Island Quartet will be gracing Mercyhurst’s Walker Recital Hall stage March 15 at 7:30 p.m.
The quartet has an ex-shell-ent record, having won multiple Grammy Awards for Best Crossover category.
“We look forward to welcoming two-time Grammy Award-winning Turtle Island Quartet to Mercyhurst University,” said MIAC Director Brett Johnson, Ph.D.
“Turtle Island has been a singular force in the creation of bold, new trends in chamber music for strings since its inception in 1985, fusing classical quartet aesthetic with contemporary American musical styles,” said Johnson.
The music comes in a variety of tempos, from slow-and-steady to winning the race — there’s something for everybody.
The group’s name is derived from the Iroquois Creation Myth.
Before there was land, the Earth was completely ocean.
There was an island floating in the sky where the Sky People lived. The Sky People never died, and no one was ever born.
When a woman from the Sky People became pregnant with twins, her husband pushed her through a hole beneath a tree and she fell from the island, landing on the Earth, where there was only water and sea animals.
She was caught by two birds who brought her to the other animals to help her.
Little Toad dove to the bottom of the sea to bring up mud, which the animals spread on the back of Big Turtle.
The mud grew until it became the size of North America, and that was where the woman was able to live. She created stars from dust and then she created the sun and the moon.
Her twins were born and were named Sapling and Flint—the first created all things good and the second created all of the bad within the good.
The story is a beautiful illustration of the respect and relationship the Iroquois people had with nature and its animals.
Don’t miss the greatest quartet since the Teenage Mutant Ninja Turtles — it is sure to be a shell of a time. Admission is free to Mercyhurst University students.
Adult tickets cost $20, senior tickets cost $15 and student and youth tickets cost $10.