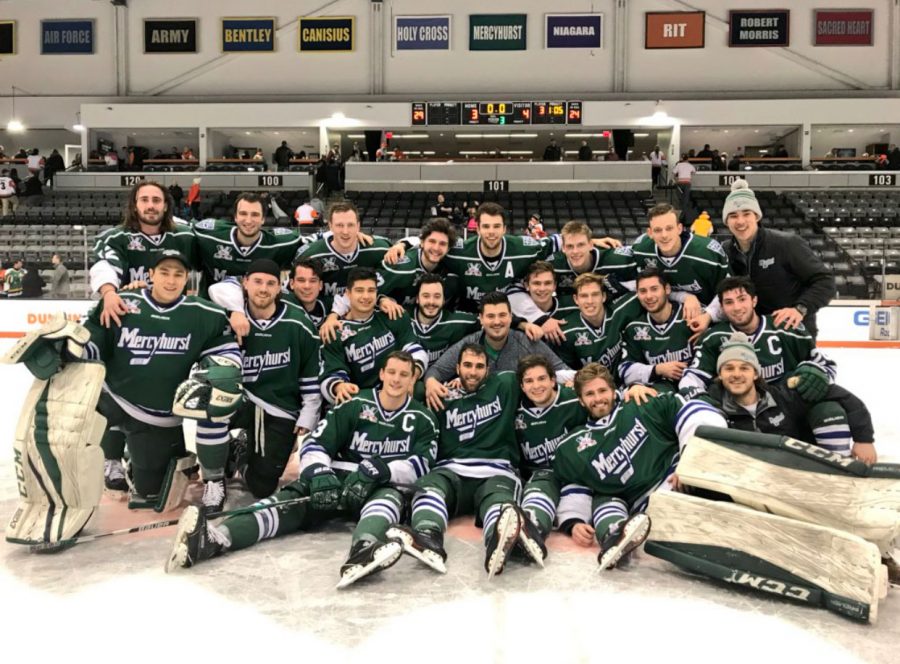 By the time the weekend was over, the Mercyhurst Lakers men’s hockey had racked up accomplishments during their final regular season play in Rochester, N.Y.  After beating the RIT Tigers on Feb. 23-24, the Lakers clinched the Atlantic Hockey Association (AHA) regular season title.

The weekend also saw captain Jack Riley reach the 100 career points milestone as a Laker.  In game one, the Lakers’ Bryan Sienerth opened the scoring early in the first (assisted by Zach Todd), giving the Lakers a 1-0 lead.  A mere 38 seconds into the second period, Sienerth iced another, scoring his second of the night for a 2-0 Laker lead. Riley and Derek Barach recorded assists for the Lakers’ second goal.

It wasn’t until roughly halfway through the second that the Tigers managed to find the back of the net making the tally 2-1.  With just over a minute remaining in the second, the Tigers tied the game 2-2.  The Tigers then took their first lead of the game early in the third period.

Less than two minutes later, the Lakers regained their footing when Joseph Duszak found the back of the net, tying it at 3.  Riley recorded his 15th goal of the season, giving the Lakers a 4-3 lead that remained until time expired and giving Riley credit for the game-winning goal.  Late in the third, it looked like there was a Tiger goal, but goaltender interference was called on the play, ruling the goal no good.

Lakers goaltender Brandon Wildung stopped 35 out of 38 shots, and Mercyhurst finished 0-for-3 on the power play while the Tigers went 0-for-4.

The Lakers returned to action Saturday night to become the AHA regular-season champions, finishing with a 4-3 win over the Tigers.  Half way through the first, the Lakers were behind 1-0 after the Tigers capitalized on a power-play opportunity.  Less than 2 minutes remained in the first when Michael Verboom was able to tie the game at 1, with assists from Duszak and Jonathan Charbonneau.  During the second period, RIT capitalized on their second power-play opportunity, regaining their lead.  It wasn’t until late in the second that the Lakers would tie when a goal from James Anderson made the score 2-2.

The Tigers followed this with another power-play opportunity, taking back the lead 3-2.  Less than a minute into the first period, the Lakers capitalized on a power-play opportunity to put the score at 3-3.  The power-play goal from Sienerth came with assists from Barach and Todd. Duszak’s breakaway goal (assisted by Nathan Ferriero) gave the Lakers their first lead of the game.
Time expired, and the Lakers won 4-3. Mercyhurst went 1-for- 5 on the power play, while RIT was 3-for-6.

Wildung had 24 saves for the Lakers.

“I’m so happy for our team,” said head coach Rick Gotkin. “Our team really persevered all year, and it’s just a great way to end the regular season.”

Mercyhurst will be the No. 1 seed in the Atlantic Hockey Tournament.  AHA Tournament quarterfinals are scheduled to take place on March 9-11. The Lakers’ opponent is yet to be named.