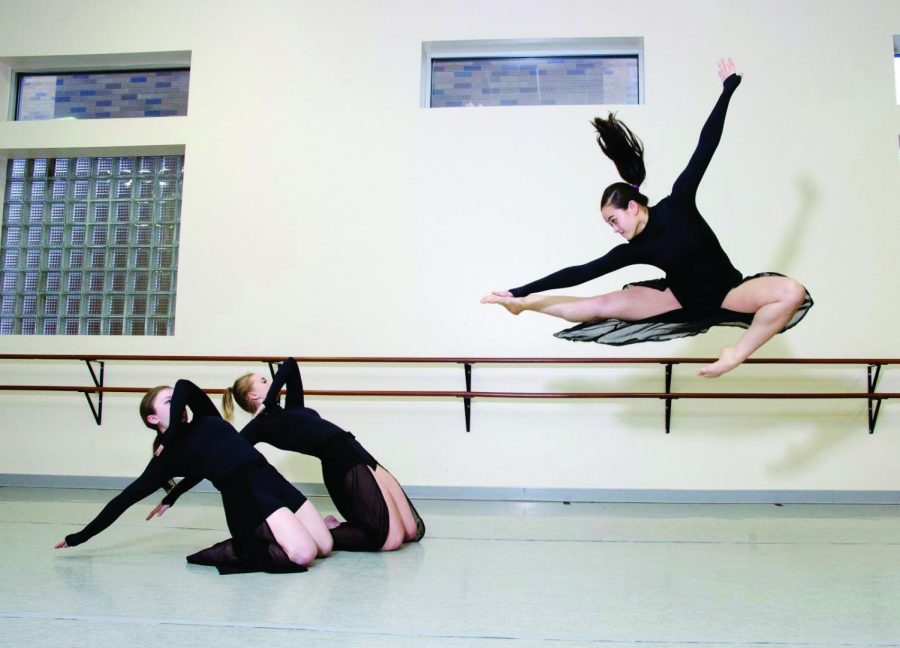 Works circled and cycled its way through the first performances of the year at the Erie Art Museum on Feb. 23-24.

Directed by Mercyhurst Dance professors Mark and Solveig Santillano, “Cycles and Circles” was a performance unlike anything the company has done before as it was performed in the round with audience members seated in a circle.

This set-up was decided upon when the directors realized that the museum’s stage was not large enough to accommodate all of their dancers.

“We were looking at this beautiful room in the art museum and we were thinking how could we do this and not be on the stage and give everyone a decent seat,” said Mark Santillano. “If we’re in a round, everyone has a front row seat.”

First-year company member Jenna Swartz said before the event that she believed that this gave audiences a more intimate experience.

“It will be much more up close and personal than most dance concerts people have probably been to,” said Swartz. “Overall, I think it will be a very diverse concert that will show the creativity and artistry of SoMar Dance Works.”

The round set-up led to the development of the show’s circular theme.

“We like to do theme-based concerts whenever we can,” said Solveig Santillano. “This led us to an exploration of what is circular and what is cyclic.”

Under this theme, the company premiered their rendition of the famous opera, Carmina Burana.

Other pieces included a tribute to the four seasons, featuring Igor Stravinsky’s Rite of Spring, Antonio Vivaldi’s Winter, and a number of pool inflatables.

“SoMar is pretty infamous for putting their own, quirky stamp on everything they do, and this is no exception,” said company member Carrie VanOsten. “There’s a huge variety, and hopefully something for everybody to enjoy.”

A selection of SoMar classics were also performed by the 15-dancer company.

Company dancers include 12 Mercyhurst dance majors, an alumna, and the Santillanos.

Theisen, the composer and musician, created two original pieces for this performance, one of which was a solo danced by his wife.

“We are excited to work with him,” said Solveig Santillano. “We have used his music before, but this is the first time he has written a piece specifically for us.”

“We like to work with live musicians whenever we can,” said Mark Santillano.

Those who missed “Cycles and Circles” or who want to see SoMar Dance Works perform again have the opportunity to watch the company at Water Dance on April 14 in downtown Erie.

SoMar will be joining various other artists from throughout Erie in the nationwide performance campaign for conservation.