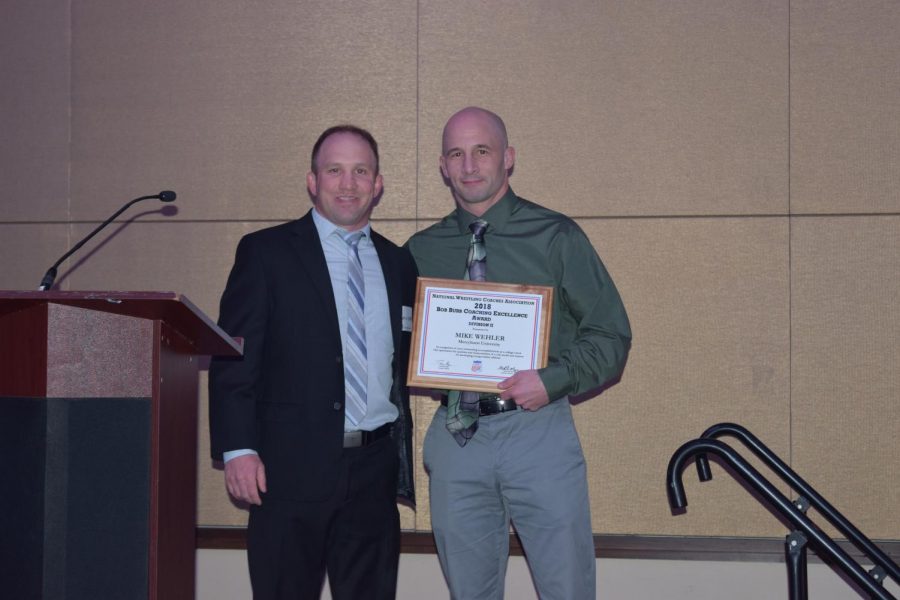 The National Wrestling Coaches Association (NWCA) has named Mercyhurst Wrestling Head Coach Mike Wehler as the winner of the annual Bob Bubb Coaching Excellence Award.  Wehler, who is in his 11th season at Mercyhurst, has now won four nationally recognized awards in four years.  Wehler is only the second wrestling coach in Mercyhurst program history.

“Coach Wehler continues to set the bar high in the coaching profession,” said NWCA Director Mike Moyer, who presented the award. “He is a consummate servant leader who is always giving back to the sport.”  Wehler was selected as the winner following nominations from fellow Division II wrestling coaches, and he beat out strong contenders such as Doug Moses of New Mexico Highlands (1-3) and Steve Costanza of St. Cloud State (19-0).

“This award means a lot to me because of the process by which it is decided,” said Welher. “The fact that all DII coaches vote and that this was determined by my peers makes it that extra bit special.”  The Bob Bubb Coaching Excellence award, named after the college coaching legend and wrestling leader Bob Bubb, is presented to an outstanding staff member who epitomizes the qualities and characteristics of a role model and mentor for young student-athletes.  With regard to this, Wehler said that he is flattered to be considered in this category.  He cited being relatable, getting a message across effectively and holding kids accountable as some of the qualities that make a good coach.

“Mike works extremely hard to recruit talented student-athletes who excel in competition and in the classroom,” said Lauren Packer Webster, the interim director of Athletics at Mercyhurst. “His receipt of the Coaching Excellence award confirms what we have known for over a decade at Mercyhurst. His care and compassion for his student-athletes and their growth as people is unrivaled.”
Coach Wehler is also known for his emphasis on academics, and his team finished the season with a 3.360 GPA for the 2016–17 year, the seventh highest in all of Division II.  The Lakers ended this dual meet season with an 11-2 record, having had an 11-match winning streak for the majority of the season.  They finished second in the Pennsylvania State Athletic Conference with a 5-2 conference record.

The Lakers qualified five athletes in the NCAA DII National Tournament, including two who earned All-American status.  “The best part of my job is always having interaction with the student athletes and being able to relate to and motivate them,” said Wehler.

The National Wrestling Coaches Association contributed to this report.