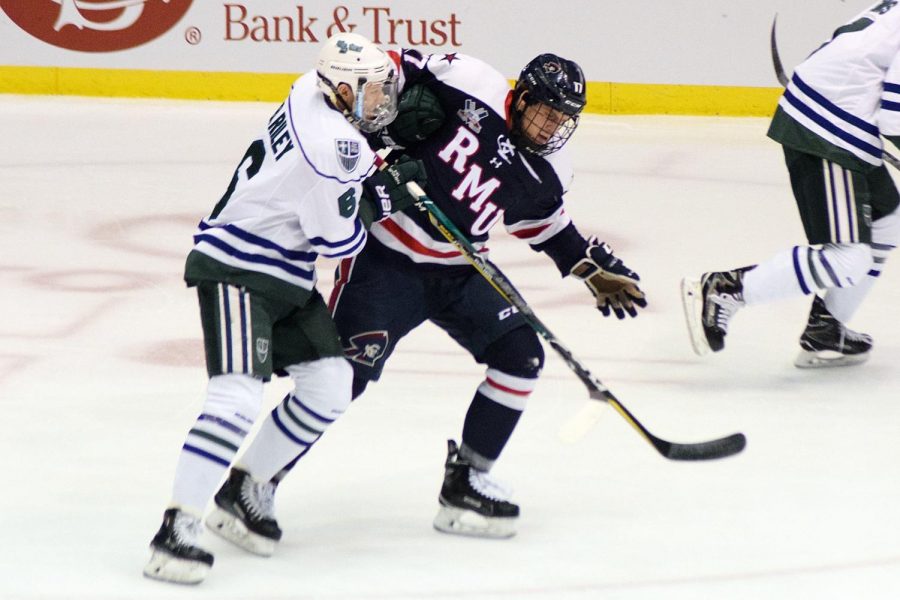 All season, it appeared as if Rick Gotkin’s team was in steady ascent.

Indeed, with a squad featuring five Second Team selections rattling off a nine-game home winning streak and several individual milestones to boot, it all seemed to feel complete after a 14-2-2 start to 2018, culminating in a Coach of the Year award and the first Atlantic Hockey regular-season title brought back to Erie in four years.

But Rochester — specifically downtown’s Blue Cross Arena — has never been kind to him, and this past Friday was no different.

“We for whatever reason started the game on our heels and played very tentative through the second period,” said Gotkin.  “Though we played our game in the third period and really took it to them only to fall short in overtime.”

Despite receiving votes in both national polls for the last seven weeks, his 21st-ranked club saw its season end, as the Robert Morris University Colonials’ Michael Louria scored 6:42 into overtime to send the seventh-seeded Colonials to their third straight conference championship with a stunning 5-4 victory.  Coming into the contest after a quick sweep of Sacred Heart in Erie the previous weekend, the Lakers (21-12-4) were actually just 44.8 seconds from advancing when, playing 6-on-4 after Jack Riley got booked for being a sixth man at 18:46 of the third, Colonial standout and First Team selection Brady Ferguson found his third of the game from the point through traffic and off Brandon Wildung’s (20-10-4, 2.81) screened blocker.

The contest had been balanced throughout, as the ice wasn’t broken until 19:09 of the first.  Lancaster and Derek Barach, immediately out of the box from a trip with 3:07 left in the first, found Kane Elliot off Colonial Francis Marotte’s shoulder.  Ferguson immediately found the equalizer on the other side of the first intermission, winning a draw in the zone back to Colonial Eric Israel for an immediate strike at 4:44 of the second.

He then teamed up with Louria and Sean Giles for the Colonials’ (18-19-3) first lead just 4:19 later.  An interference call on Colonial Robert Powers at 10:54 produced just three shots, and 12 stops from Marotte in the period only allowed Taylor Best to find an equalizer with 8:01 elapsed in the third.

Meanwhile, Wildung’s defense was holding its own after 15 of his 37 saves and a charging call on Barach at 13:16 of the second killed.  Barach and Colonial Daniel Mantenuto scored 14 seconds apart for the second tied score within a 4:07 stretch, slamming off a rebound from Tyler Enns.

Just 1:10 later, Joseph Duszak collected his own rebound off the boards behind Marotte to set up Ferguson’s ultimate equalizer after five saves off Wildung in the five and a half minutes before Riley’s penalty and an empty Colonials net.

After registering several chances to finish off the contest in the extra session, the Lakers fell victim to nine of Marotte’s 40 saves before Ferguson checked Elliot in the left defensive zone. This left a bouncing puck for Colonial Alex Tonge as he fired a long pass to Louria on the blue line despite Louria initially missing the puck.  Louria beat several Laker defenders to keep the play onside and backhanded the puck past Wildung to finish the play.