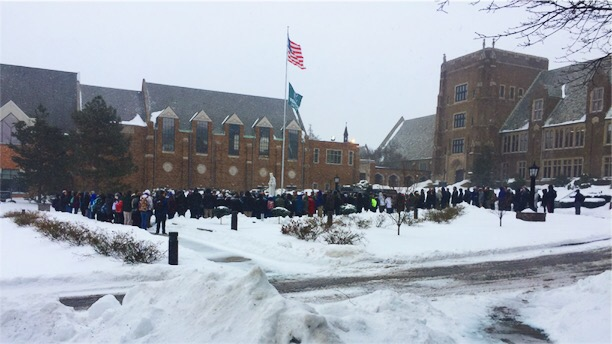 Valentine’s Day is normally synonymous with hearts, love and all things romantic. However, this year’s holiday will go down in history for something much more devastating: one of the world’s deadliest school massacres.

Nikolas Jacob Cruz, 19, is accused of opening fire in Stoneman Douglas High School in Parkland, Florida, on Feb. 14, killing 17 and injuring an additional 17.

The tragic event quickly attracted national attention and condolences. However, the Parkland survivors were quick to say that they needed more than just kind words — they needed preventative action.

The shooting quickly became a subject of great debate, regarding school safety, violence and gun control, which eventually translated into a nationwide campaign led by a group of surviving students known as Never Again MSD (Marjory Stoneman Douglas High School).

The group is working to prevent future shootings through the promotion of conversation, political activism and nationwide demonstrations.

The most recent of these demonstrations, the National School Walkout, took place on the morning of March 14.

Organized by the Women’s March Network, students throughout the country were encouraged to leave their classroom at 10 a.m. for 17 minutes in memory of those who lost their lives in the shooting and to protest Congress’ inaction regarding gun control legislation.

The official webpage explains the event’s intentions with the following: “Students and staff have the right to teach and learn in an environment free from the worry of being gunned down in their classrooms or on their way home from school. Parents have the right to send their kids to school in the mornings and see them home alive at the end of the day.”

Thousands of students from every grade level and corner of the country — including Mercyhurst students — joined together to say #Enough and #NeverAgain.

Two days before the demonstration, President Michael T. Victor sent an email out to students announcing that the school would be chiming the bells 17 times in memory of the 14 students and three faculty members that lost their lives in the tragedy.

He also shared the administration’s support of all students who chose to take part in the walkout and designated spots on campus for students to gather.

President Victor justified the position on the demonstrations with its alignment to the Mercy Mission and core values, including a quote from the Sisters of Mercy of the Americas.

“Let our hands reach out and connect with those who feel alone, those who live in fear, and those suffering from mental illness,” the quote read. “Let our voices be raised asking our legislators to enact gun laws to protect all in our society, especially those most vulnerable. Let our pens write messages demanding change while also scripting words of hope and transformation. We ask this in the name of the God who desires that we live together in peace.”

Despite the chilling temperatures and heavy snowfall, a large number of students prioritized their intentions for walking and joined in the demonstration.

“I chose to walk out because activism and peaceful demonstrations are incredibly important to democracy,” said freshman Dance major Caroline Schroer. “I find it disgusting that excuses are still being made when senseless tragedies like the Parkland shooting occur, and I think that our legislators need to make common-sense gun laws a priority to prevent as many future attacks as possible.”

Fellow freshman Dance major Allison Christopher shared in the sentiments, saying that she walked out in support of the many survivors.

With passions high for the day’s event, Schroer described the atmosphere as both reflective and contemplative.

Without a speaker or leader, students stood in silent prayer and reflection for the length of the walkout, which Christopher found to be especially effective.

“I really wasn’t sure what to expect. I was partially expecting some words to be said but that did not happen and in actuality made the event more powerful of an experience,” she said. “It was a really interesting experience to be a part of, standing in silence, peaceful protest showing our solidarity with the survivors.”

Both students considered the event to be successful in sparking conversation about important social and political issues, however the conversation is not yet over.
On March 24, thousands are expected to take part in the March for Our Lives rally, taking to the streets to demand legislative action against gun violence.

Demonstrations will be held in major cities across the country, including in Erie.

Funding for the march is being provided by many including celebrities such as George Clooney, Oprah Winfrey, Jeffrey Katzenberg and Steven Spielberg. Each has pledged $500,000.
Mercyhurst will be providing interested students with transportation to the Perry Square location in downtown Erie.

The link to sign up for this opportunity can be found in the most recent issue of The Weekender.