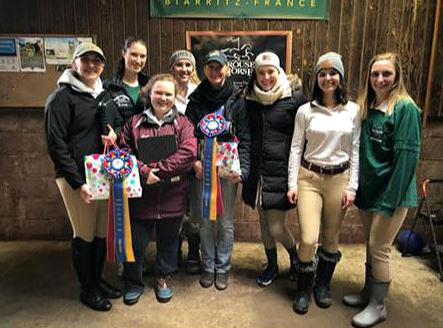 Mercyhurst’s Equestrian Team has had a successful season.

Eight Mercyhurst students have made strides this year with the MU Equestrian Team, which has become a serious competitor in the Intercollegiate Horse Shows Association (IHSA) across Pennsylvania.

Under coach Halli Bidwell, the team finished second out of 14 teams this season, sending five riders to regionals. In addition to these five, the team had three riders qualify for Zones, the last qualifying round before Nationals, which will take place April 8 in New Jersey. Other team awards this season included Champion at Stonegate and Reserve Champion behind Seton Hill University.

“It is exciting to see how this team has gone from a few members to a full roster,” said Bidwell. “I am thrilled to see how hard they work, help each other and really function as a team. This young group has been competitive against the big teams. I am looking forward to next year with high expectations.”

The team has made drastic improvements in the last year.

“This year we made huge accomplishments, not only winning our first prize in the history of the team, but also winning Reserve Champion over larger schools,” said co-captain Thayer. “All of our riders are enthusiastic and have created an atmosphere of fun and excitement that was important to our success. I am really looking forward to picking up from where we left off next year and seeing what else we can do.”

The Mercyhurst equestrians compete within IHSA’s Zone 2 Region 5. They have a wealth and variety of experience to draw on, with some members having ridden for 17 years, while others are much newer to the sport. Along with Bidwell, the team is overseen by faculty adviser Mary Ann Owoc, Ph.D., associate professor of Anthropology/Archaeology.

“There are so many different personalities on the team that give it a great dynamic,” said Snable. “We know we can count on one another. As for our accomplishments, I cannot say enough about season. We have gone above and beyond what we thought we could do and ended the season as Reserve Champion for the first time in school history. There are high expectations and goals for next season and I cannot wait to see what we do as a team.”