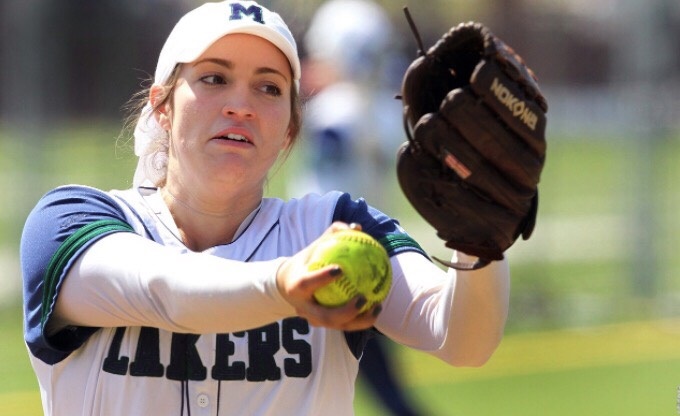 Tori Pierucci enters Mercyhurst Softball as a junior, receiving her accolade only 14 innings into her season.

After less than four months on the Mercyhurst softball team, junior Tori Pierucci was named Pennsylvania State Athletic Conference (PSAC) West Pitcher of the week.  Pierucci was named for her achievements in back-to-back games against Seton Hill on April 2.

“I was really shocked and really excited,” said Pierucci. “I never really win things, so I thought it was really awesome and such a great surprise.”  Pitching for a total of 14 innings, Pierucci recorded 13 strikeouts, scattered six hits and was charged with one earned run.  Pierucci pointed to her father as her greatest source of support.

“He helped me become the softball player I am today,” said Pierucci. “He would sit on a bucket almost every day after work and catch my crazy pitches, and even though I chipped a few teeth and broke a toe or two, he would always get back out there and keep catching me.”  Originally from San Francisco, Pierucci joined the team at the start of the season and immediately began dedicating time to practice and to the team.

“Tori has worked hard since arriving at Mercyhurst in January,” said Leanne Baker, head softball coach. “This honor is well deserved on her part. She has learned a lot from our Pitching Coach, catchers and fellow pitchers to help her thrive in the PSAC.”  Pierucci and the Lakers will be playing Slippery Rock University in their next game. The double header is at home, starting at 2 p.m at the Mercyhurst Softball Field.  “Something we strive for on the team is to be a great teammate. I believe that we have a team of great teammates, and they are happy for the honor that Tori received,” said Baker. “This past week, Tori was the face of the hard work this team has been doing all year, and that is inspiring for everyone.”