Learning to rise above it all 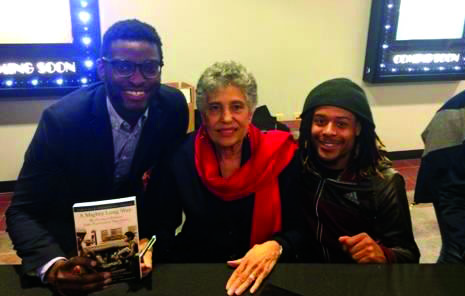 Seniors Jonah Jackson and Emmanuel McDowell, along with other students, were excited to meet and speak with Carlotta Walls LaNier.

Carlotta Walls LaNier is an author, speaker and civil rights legend, most well known for her graduation from Central High School, in Little Rock, Arkansas, as the youngest of the Little Rock Nine.

Speaking as part of the Charlene M. Tanner Speaker Series, LaNier shared her story with students and the public on April 3.

As the first black woman to graduate from the white-only Central High School, LaNier gave the audience a message of hope, answering the question: “What can we do in these times to advance diversity?”

Beginning with a story of the late Martin Luther King Jr., LaNier retold his message of compassion, education and nonviolence on the 50th anniversary of his death. Recalling her first meeting with him when she was 14 years old, she described him as a young minister eating barbecue and drinking beer, unaware of the man he would become.

To answer her question of how to advance diversity, LaNier reflected on his work, saying, “The time is always right to do what’s right. We must never remain silent. We had the burden of being first. But King’s message was one we believed before he even spoke it. We can find the occasion to speak on diversity now more than before.”

LaNier grew up in the Jim Crow era using a separate water fountain, riding the back of the bus, sitting in the balcony of the theater and, most significantly, attending a different, segregated school.

When offered the opportunity to enroll in Central High in 1957, she jumped at the chance. Within a few short months, LaNier’s life was changed forever as troopers escorted her and her eight black peers from one class to the next amid the taunts and mobs of white anger.

“I knew that there would be some pushback, but not to the extent that there was,” said LaNier. “I knew that there were kids that did not want me there, but I thought once they got to know me, that would fall off their shoulders a bit. Unfortunately, some students made it their job to make life miserable for us.”

While LaNier clung to the opportunities she could gain from education, the governor made the decision in 1958 to close all the schools in the county. To prevent any integration, he left 38,000 students, black and white, with nowhere to go. Only one of the Little Rock Nine had graduated, and the others could do nothing but continue schooling elsewhere as the case went through the federal courts. LaNier was finally able to return to school in 1959, along with four other black students, to complete her senior year.

Even with this legal success, LaNier faced far greater challenges in her final year, with the bombing of her home in 1960 and the increased restrictions on her education by the school’s administration. When asked if she planned to return to Central High following the bombing of her home, a young LaNier recalled telling the press, “I will go back to school or die trying.” In 1960 she graduated along with her white and black peers, and continued on to college at Michigan State University.

In later years LaNier was awarded the prestigious Spingarn Medal by the NAACP, was an honored guest at the inauguration of President Barack Obama and has served as president of the Little Rock Nine Foundation.

Her two main lessons learned in her high school years were: “Hang in there, and trust yourself and your instincts first.”

LaNier closed her talk by calling for love and compassion.

“I had all this because nine white men in the Supreme Court said we had the right,” said LaNier. With Number 45 (President Donald Trump) in the White House, we have become as we were 60 years ago. We are anxious and worried about what lies ahead. But we have come too far to turn back now. If we meet differences openly, willingly, we will be surprised. Be kind to one another. All that we do when we encounter others, matters.”