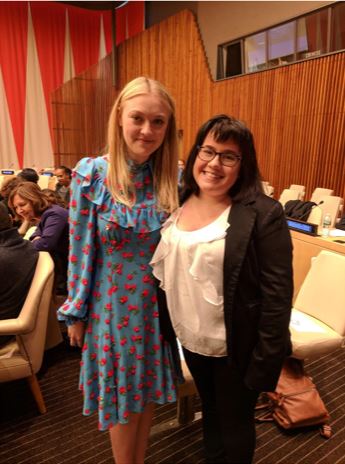 Sophomore Rachel Wilson, left, spoke at the U.N. headquarters in New York and got to meet exciting people, like Dakota Fanning.

On April 5, sophomore History major Rachael Wilson had the life-changing opportunity to travel to the New York City headquarters of the United Nations for the official celebration of World Autism Day.

“AIM has worked hard to create opportunities for its students through its collaborations with private organizations, government agencies, and businesses working to increase employment of persons on the autism spectrum,” AIM director Brad McGarry said.

Wilson proved to be the perfect candidate for this opportunity with this year’s theme “Empowering Women and Girls with Autism.”

“Brad was invited to speak on the panel that I was on. However, he didn’t think that it was a good idea for a neurotypical guy to talk about the education and employment of autistic women so he asked me to take his place,” Wilson said.

She was among the youngest speakers on her panel, entitled “The Four E’s: Education, Employment and Economic Empowerment.”

Other panelists at the celebration included a woman on the spectrum who was recently hired by a New York financial firm and the vice president of a Polish organization that focuses on employing people on the autism spectrum.

“My panel discussed education and employment of women on the spectrum,” said Wilson. “I talked about my high school experience and … Mercyhurst and the AIM program and what they’ve done for me.”

She hopes that those who listened to her speak come to recognize the value of people on the autism spectrum both in education and in the workplace.

Following the panel, Wilson attended the second annual Autism Advantage Luncheon with McGarry, organized by the United National Department of Public Information and the Specialisterne Foundation.

“The luncheon was pretty cool,” said Wilson. “It was really nice to hear a bunch of experiences from different employers and hear them all brainstorm about how to incorporate all of us neurodiverse adults into the workplace. I also got to network with a bunch of different companies so that was nice as well.”

The Mercyhurst group also had the exciting opportunity to attend other panels, including “Ableism, Sexism, Racism … How they Intersect,” “Women with Autism in Film,” “Gender Disparity in Diagnosis: Causes and Consequences” and “Heightened Risk: Violence, Sexual Exploitation and Abuse.”

Overall, Wilson found this to be a valuable, educational experience.

“I learned not to change the things that make me different into what most people, let alone employers, expect from those who aren’t autistic,” said Wilson. “We’re starting to live in a world where people realize that we aren’t too different, but what makes us different is very special, and I’m very excited I got to be a part of that.”