Park to be renamed 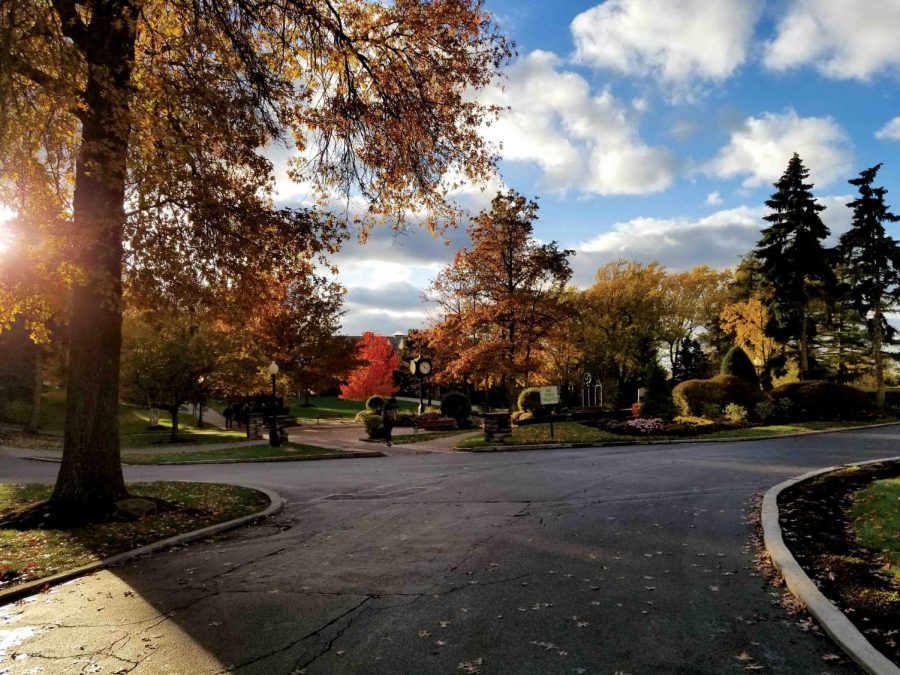 Garvey Park, a green space in the center of Mercyhurst campus named for William P. Garvey, former Mercyhurst president, will be renamed.

On April 9, Mercyhurst announced the renaming of one of the largest and most recognizable spaces on campus: Garvey Park, named after the university’s ninth and longest serving president, William P. Garvey, Ph.D.

The change came about after Garvey, who died in 2017, was included on a list of people credibly accused of child sexual abuse allegations that was released by the Erie Catholic Diocese on April 6.

The allegations have circled Garvey since 2004 when, as reported by Erie Times-News, six men came forward accusing Garvey of sexually abusing them as children during the 1960s and 1970s.
According to the Erie Times-News, Garvey called the accusations “patently untrue” and would refuse to be interviewed by any news sources. Mercyhurst did not punish him due to lack of solid evidence on the situation.

Garvey was a basketball coach for Erie’s St. John the Baptist church from 1960 to 1980. He went on to serve as Mercyhurst president until quietly resigning in 2005.

President Michael T. Victor’s administration, which began with the start of Victor’s tenure in 2015, was not involved with the earlier response to allegations against Garvey.

After the announcement of Garvey’s name among 51 other clergy and lay people who were credibly accused of child sexual abuse, the Victor administration announced coming changes at the university.

“We immediately responded to the diocesan announcement in a spirit of Mercy, urging prayer for the victims and seeking God’s mercy for those who would commit such egregious acts against children,” said the Victor administration. “But, they felt more had to be done.”

Feeling that a more physical representation of the opposition to Garvey’s crimes needed to be made, the university will be removing all honors and awards to the former president from campus. Garvey’s presidential photo in the library and the plaques bearing his name in Garvey Park have already been removed.

Many people have advocated for this change over the years, including various faculty, administration, staff, students and alumni.

According to a 2005 article in Erie Times-News, the Faculty Senate at that time opposed the name of the park and suggested “Advent Park” as a new name to represent healing and a new era for Mercyhurst.

The Victor administration has not determined its plans for renaming the park at this time.

In 2015, Ryan Kushner, opinion editor for the Merciad, published a column advocating for actions to be taken by the university.

“I’m not writing this article to open old scabs or rekindle past pain experienced by the Mercyhurst community, a past pain that I personally was not around to endure,” said Kushner in his article. “I’m writing instead in an attempt to address and suggest the sewing of an open wound that has been preserved and memorialized for over a decade now.”

Mercyhurst is not removing Garvey from the history books due to his positive contributions during his time as president.

“He is still listed in our literature and our website as Mercyhurst president from 1980 to 2005; that is a historical fact,” said the Victor administration. “And the people, especially many alumni, whose only familiarity with Dr. Garvey is as a visionary leader and inspiring educator, can remember him in a positive way if that is their choice.”

While these events of the past are painful for all involved over the years, the Victor administration sees the renaming of the park to be a start for healing that is long overdue for the university.

“The hope is that the action of the current administration will help with the victims’ healing and allow Mercyhurst University to focus on its future,” said the administration, “one in which its Mercy legacy and core values continue to be held in the highest regard.”