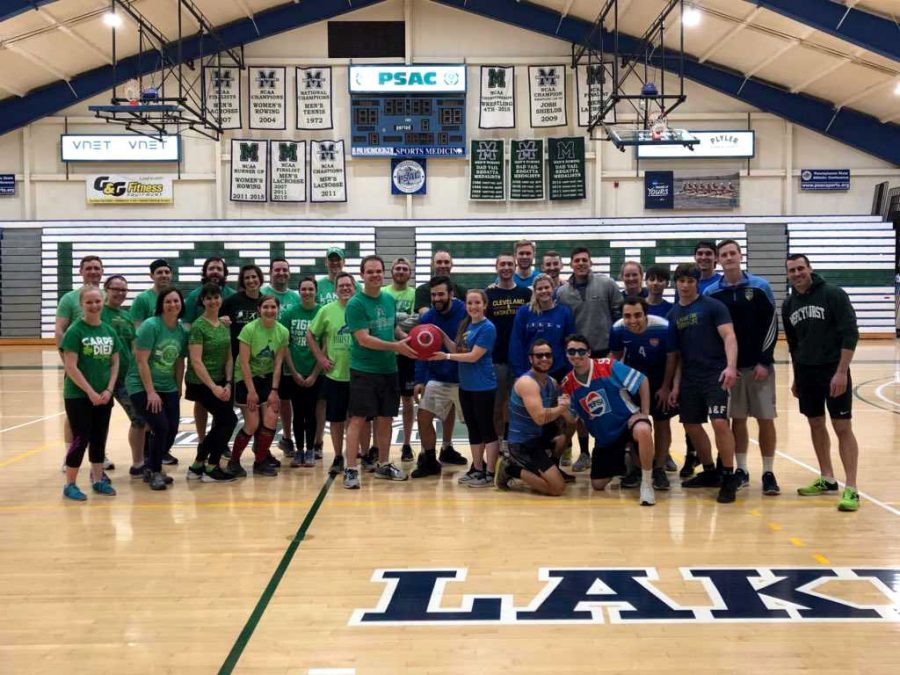 Faculty and staff get ready to face off against the senior team in a kickball game to raise money for the Class of 2018 Senior Gift, the Sister Lisa Mary McCartney scholarship.

On April 10, Mercyhurst faculty and staff faced off against the senior class for a legendary game of kickball. The game, sponsored by the Senior Class Gift Committee, began at 6 p.m. in the Mercyhurst Athletic Center and helped to raise money for the Sister Lisa Mary McCartney Scholarship.

The faculty and staff were represented by a number of competitive spirits, including Greg Baker, Ph.D., director of Campus Ministry; Bethany Brun, coordinator of Service Learning; Joseph Johnson, Ph.D., assistant professor of Physics, and many others.

“I heard they were still looking for some employees to participate,” said Baker. “I passed a good number of my childhood summer days playing kickball, and I knew this would be a fun environment.”

A number of the faculty and staff enjoyed the opportunity to interact with colleagues and students outside of the normal classroom and work environment.

“It was really fun. I can’t remember the last time I played kickball,” said Johnson. “It was nice to get to meet some colleagues I hadn’t met before and to see others outside of the academic setting. Several of my former students were organizing the event and several played on the seniors’ team. It is a unique opportunity to interact with students in a fun and non-academic setting. I enjoy stepping out of the professor role and being a little competitive.”

Students also enjoyed getting to see professors in a new light. Emily Hair, senior Sports Medicine major, decided to get involved in the game to play alongside other seniors and to help with fundraising.

“We get to see professors in a different setting, which is kind of cool,” said Hair. “Playing in an event like that brings the competitiveness out of everyone, and it’s kind of funny to watch.”

Overall, the game was fun and entertaining for all involved.

“The game would always be better outdoors, but the coordinators did the best they could to create a reasonable way to play inside the MAC,” said Baker. “I shared with my colleagues before the game the saying that an old priest friend of mine used to cherish: ‘age and treachery overcome youth and skill.’ We made those words come alive.”

The game also provided an opportunity to strengthen bonds within the Mercyhurst community.

“Having faculty/staff interact with the students in a fun and spirited environment allows the students to see us in a different light and encourages us to appreciate them outside the normal classroom/office setting,” said Brun. “I participated in the basketball game last year, and we had a lot of fun getting to know our colleagues outside of ‘work,’ so I wanted to join in this year, too. Kickball is such an inclusive game, and it was hilarious to see my colleagues diving for catches.”

The competitive nature of the game certainly brought out new sides to all involved.

“I have two words to say about the game itself: Travis. Lindahl. Our director of Adult and Graduate Enrollment played a legendary game complete with diving catches, sliding safely into base and kicking a home run. His performance should be long-remembered in the halls of Mercyhurst,” said Baker.

“The senior team held their ground, but could not match the efforts of the faculty/staff members making up their opponent team. With a score of 5 to 4, the faculty/staff team kicked the ball into the victory lane, winning bragging rights until next year,” said Lynne Gillott, senior Sports Medicine major and chair of the Senior Class Gift Committee.

There is little doubt that the members of the faculty/staff team will take full advantage of those bragging rights. Good luck to the next senior class when they face off against these formidable opponents.