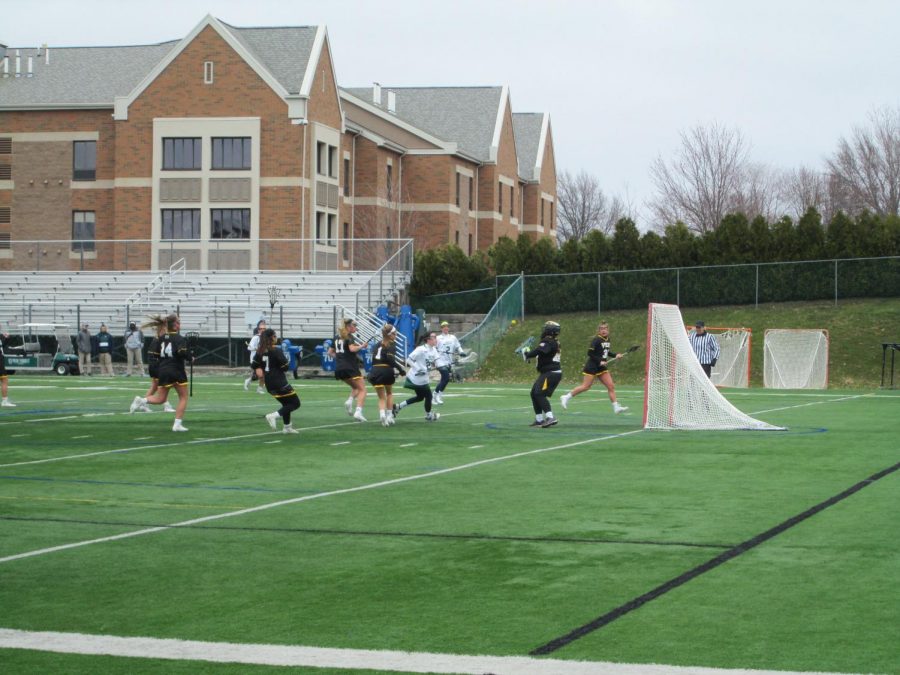 Emily Hubert sends a shot for the Lakers towards Millersville’s goalie Shannon Davis. Laker No. 2 Taylor Izzo looks on in the background during Hubert’s shot. The Lakers beat Millersville 14-9.

Against a Millersville team that nearly pulled an upset on Tullio Field last year, high-octane Laker lacrosse was the only possible response.

A 6-2 spurt in the second half combined with an outstanding midfield defense handed the No. 22 Lakers a well-needed 14-9 victory over the Millersville Marauders on April 14 to keep pace with the top of the Pennsylvania State Athletic Conference (PSAC).  Now 6-2 in conference play and sitting just a half-game ahead of Slippery Rock for third place, the Lakers have won three of their past four games and look primed to finish the season on a high.  “We moved the ball very well today. It was one of our best offensive games,” said Laker forward Lacey Netti. “The ball was always moving, people were always moving, we always found that open player to get the shot off.”

But the combination of the winds and 38 degree conditions and an above-average Marauder (8-5, 3-5) attack — including the conference’s leading goal scorer in Sabrina Fusco — proved no small matchup.  Fusco opened the scoring 46 windy seconds into the contest, but the Lakers’ Angelina Simon responded on the free position at 1:23. Simon then assisted the Lakers’ Grace Lawson, who tallied 12 seconds later.  The Marauders’ Callie Kavanaugh then responded at 2:09 with a goal. A turnover and a loose grounder got the ball to the Lakers’ Taylor Izzo before she assisted her teammate Cassandra Ellis for a goal.

Just 44 seconds later, Fusco scored again. Within the span of two minutes, she took an outlet pass from Sara Burney to beat Laker goalie Raelyn Tiberio (6-2, 9.66) for yet another score.  A foul on the Marauders’ Callie Kavanaugh allowed the Lakers’ Netti to find teammate Kristin Anderson at 9:07.  However, Fusco found Kristen Butzner for another Marauder tally. The Lakers answered quickly, with Simon winning the faceoff to find Payton Cook just 27 seconds later.  A shot from Anderson went wide of the Marauders’ Shannon Davis (7-4, 10.33) 11 seconds later, but Emma Hubert grabbed possession for a Laker score.

Anderson was called for a foul a minute later, allowing Gillian Zimmerman to find her first score of the game for the Marauders.  The Lakers’ Libby Montanye then coaxed a turnover slightly after the ensuing faceoff, leading to an Anderson tally.  The Laker defense then locked down and forced three turnovers on seven shots before a foul allowed the Marauders’ Erin Fagan a score with 2:17 left in the first half.  Izzo tallied two of the three other goals contest, the first coming at 8:13 of the second half and at 13:56. She had helped extend the lead to three 2:06 earlier, finding Simon for another Laker goal.

Izzo scored the Lakers’ first tally in more than 22 minutes at the 9:13 mark of the second half to extend an 8-7 halftime lead for the Lakers.  But less than two minutes later, Burney was coaxed into a turnover, allowing Simon another Laker goal.  The Marauders then saw another mistake turn into Laker offense with a second Marauder foul bookending a Laker clear and allowed Hubert to find Izzo.  A grounder then went to Anderson as she connected to Izzo as Netti fired past Davis to open up the Lakers’ largest lead of the day.

The Marauders went nearly 23 and a half minutes before Zimmerman broke through traffic to find Butzner.  Nathalie Sell then turned Butzner’s wide shot 45 seconds into a free position shot and found Zimmerman.  But Netti turned around to find Anderson just 39 seconds later before Hubert did the same with 6:13 left in regulation. It would be the game’s final tally.  “Our defense is such a unit and they work really well together when they’re all together, so they just shut them down,” said Netti. “We really have (also) rounded out the scoring, there’s a lot more girls who are scoring. … Teams don’t know what to expect because we’re doing a lot better with that.”

The Lakers play next April 27, traveling out to Pennsylvania’s far northeast, to meet East Stroudsburg University for the last away game.