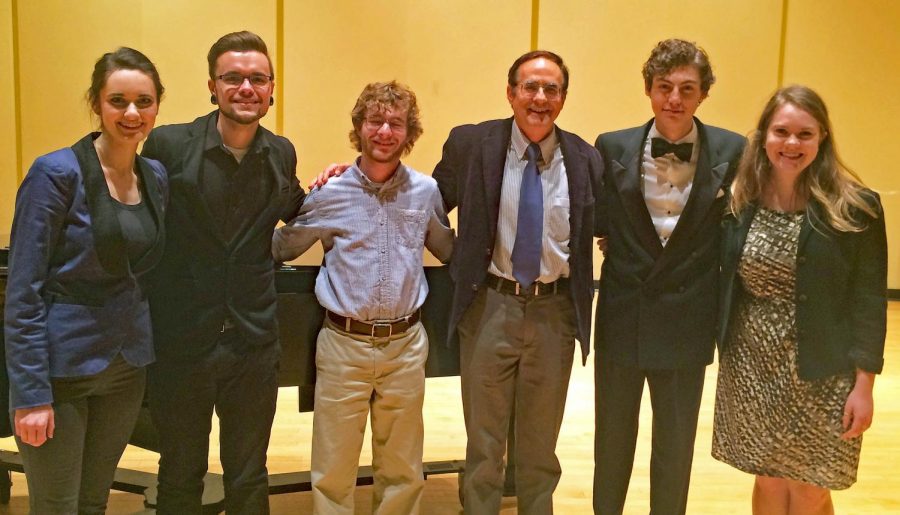 The D’Angelo Department of Music will present the works of five student composers in Walker Recital Hall on April 29 at 2 p.m.
The composers are senior Vocal Performance major Jeanette Fournier, junior Composition major Christian Goulione, senior Music Education and Composition double major Mariana Mathewson, junior Composition major Nicholas Nasibyan and junior Music Therapy major Joshua Phillips.
These students were required to find performers for their compositions and organize rehearsals for their pieces.
The students compose, on average, one new work a term, which is a lot to ask for from a creative mind.
The composers have created musical works to be performed on strings, brass, woodwinds, piano and voice.
Albert Glinsky, Ph.D., professor emeritus of Composition, has guided students through the process of composition for many years.
He said, “My teaching philosophy in composition has always been to push students to be more of who they already are; to perfect their own personal voice without my interference with their stylistic personality.”
Some of the students will be presenting programmatic compositions that explore specific events or ideas.
Mathewson’s work is inspired by her recent trip to Panama, while Phillip’s composition is inspired by his work as a music therapy student.
Goulione’s “Rain Trio” is composed in an ABA format about a calm day interrupted by a rainstorm that then clears and returns to sunshine.
Fournier has been working on her composition, a string quartet, for a little over a year.
The first movement is composed in the traditional sonata form, which is typically used for the first movement of similar compositions.
Fournier said, “The inspiration for the piece came to me last year when I was going through a very tough, emotional time due to personal issues in my life. Because I was able to express my feelings through the music, I was able to understand them better and get through the tough time.”
Phillips composed four piano pieces representing four negative emotions such as anger and depression.
He said, “Music therapists take on a lot of their client’s emotions, and naturally it can leave someone with some emotional baggage if left unchecked. This assignment is an exercise in purging those negative emotions.”
Phillips hopes the audience can relate to the compositions and the emotions that are being presented. He also wishes the audience can use his composition to connect to a time when they were feeling a negative emotion.
The Mercyhurst community is encouraged to attend this performance. The concert is free and open to the public.