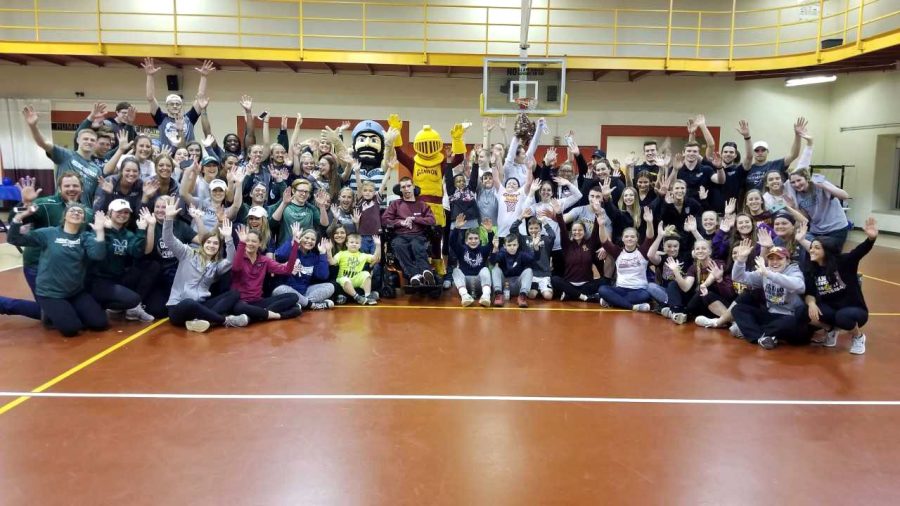 Students from Mercyhurst University and Gannon University teamed up on April 15 to raise money for the Make-A-Wish Foundation, and spend time with Make-A-Wish kids through sport.

The Student Athlete Advisory Board from both schools came together as rivals to compete for a great cause, raising more than $800 for Make-A-Wish.

Athletes and non-athletes from both schools were welcome to create teams of five to eight players, who then competed in various yard games and sports activities.

“This was a lot of work over the past several months that came together when we realized that both Gannon and Mercyhurst raise money for Make-A-Wish, and we figured that if we brought them together, we would make some extra money,” Soom said. “It is such a great thing to do. After the inaugural year, I’m hoping it really catches.”

The first hour involved playing with Make-A-Wish kids and their siblings in a variety of fun events.

After this, the college teams competed against one another for prizes and bragging rights, putting the Mercyhurst and Gannon competitive spirit to good use.

Money was also raised through a raffle and silent auction.

The kids and college athletes also tested their skills by attempting to eat doughnuts hanging from string, and knock down ping pong balls with a tissue box on their backs.

Make-A-Wish families from the local area were invited to the event in the Gannon Recreation and Wellness Center.

The money raised will support the Make-A-Wish Foundation of Greater Pennsylvania and West Virginia. Wishes are granted to children diagnosed with a critical illness, who are given the chance to have a wonderful life experience of their choosing.

Rivals in sports, the two colleges became partners for good with this event.

The initiative was organized in part by Mercyhurst senior Amanda Frappolli, Public Health and Psychology double major and president of the Student Athlete Advisory Board at Mercyhurst. Frappolli chose to make this inaugural event happen to network with Gannon University, and to see college athletes and their friends come together to fundraise for a great cause.

“The best part about Rivals Grant Wishes was being able to spend time with the Make-A-Wish kids,” said Frappolli.

“It was especially rewarding to see two rivals be able to come together for a very important cause. We achieved something special for us all,” she said.

At the end of the event, a Gannon team was crowned champion. The money raised was added to the impressive fundraising totals of the Lakers and the Golden Knights this year.

“This event emphasizes how important it is for us to help others and dedicate our time and efforts to supporting fundraisers. It was an eye-opening experience for me because it is absolutely amazing to see the happiness that comes from bringing people together,” Frappolli said.