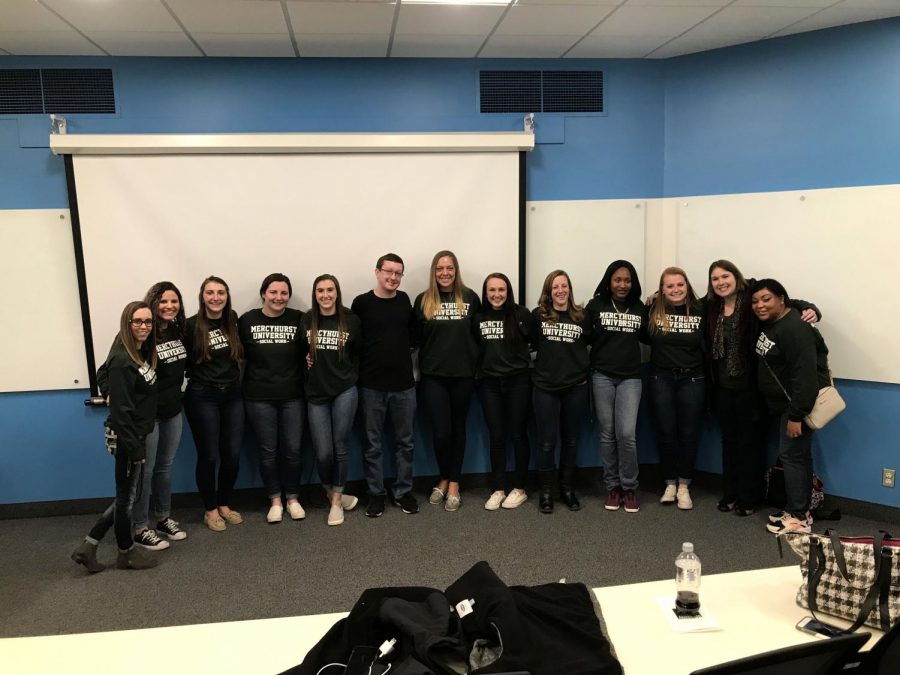 The Social Work students who created the documentary “It Can Happen To Anyone” are joined by Communication student Brent Clapper, who assisted with editing.

The Mercyhurst Social Work Classes of 2018 and 2019 presented their class documentary “It Can Happen To Anyone” on April 20, to discuss the prevalence of homelessness in our society. The documentary focused on breaking stereotypes about homelessness today in order to change the narrative of what it means to live without a stable home.

The Social Work department had three goals with its “Be The Change” project. They hoped to collect donations, break stereotypes and raise awareness. The focus of their video was Erie itself, where of our 98,000-strong population, almost 1,400 people are homeless each night.

The video focused on educating students as to how they can improve the lives and well-being of those affected in our community, and learn to see the issue in a new, more compassionate way.

“This project has been an eye-opening experience for many of us in the group. We were given the task to choose a social issue in Erie and we chose homelessness because it is a prominent issue that many of us are connected to in some way. The project was not only beneficial for us by increasing our education, but it was beneficial for those that we worked with and those who will watch the documentary,” said Snable.

She was joined by junior Social Work major Kylie Lehner, who thanked those involved and introduced the video.

“Every time we go downtown, we see someone on the side of the street. We often do not feel the compassion we should, and we want to break the stereotypes because homelessness can happen to anyone,” Lehner said.

The video began with some compelling statistics on the current situation in Erie, as well as a reminder that each night across the United States, 554,000 Americans live without stable shelter.

Eddie Martin, Erie homelessness case manager, was interviewed in the video to discuss the stereotypes that often stop people from giving help to those on the streets.

“People have a lot of negative ideas about homeless people,” Martin said. “But in reality, a lot of the time, life just throws people a curveball.”

As well as social care workers, the video also interviewed Erie residents and Mercyhurst students and staff. Director of Campus Ministry Greg Baker spoke on the role of compassion in dealing with homelessness, and the importance of connecting with people to understand their stories.

Erie resident Collis Allen, who has experienced homelessness first hand, told the students “there is the whole theory of pulling yourself up by the bootstraps. But at some point, we all need a hand up, not a hand out.”

The students truly took this on board, taking the time to get to know interviewees, and collecting over 150 bags of donations that included basic hygiene items, clothes and blankets for them.

“Collecting donations and bringing awareness are just some of the small things that we can do, but as the video tells us, we need to switch from charity to social justice, and do this by getting policies changed,” Snable said.

For the students involved, it is fair to say that their idea was of this complex issue was considerably changed while working on the project. It is hoped that the lessons learned by the class can be extended outward to the Erie community long after the film screening.

“This project was very rewarding, and it provided a unique opportunity to become more aware of this prominent issue,” said senior Social Work major Hope Lowry. “It made me realize that this can happen to anyone. In addition, it made me see that anyone can make a difference in the lives of others, specifically those in need.”