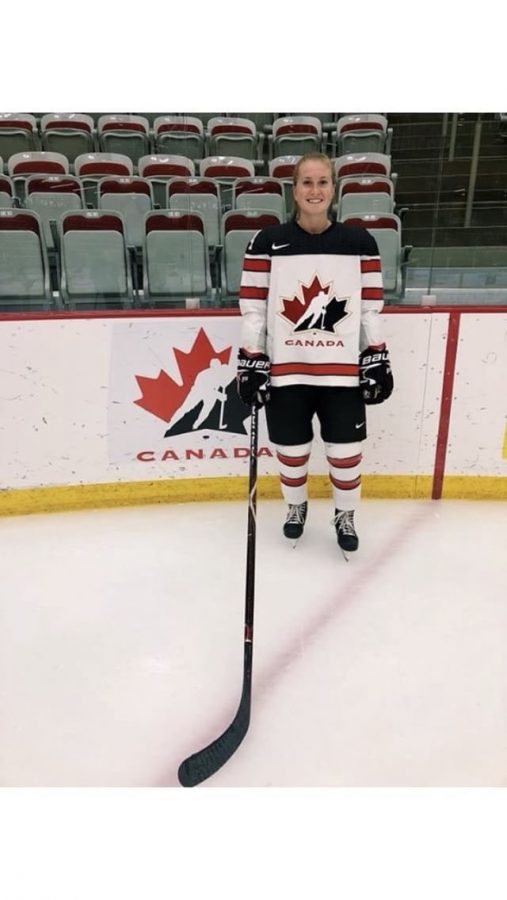 Alexa Vasko, a sophomore for the Lakers women’s ice hockey team, had the opportunity to attend Hockey Canada’s Development camp.

What an amazing experience for Alexa Vasko, (in her own words) being able to realize “something every little girl dreams of” with “such amazing teammates and staff.”

Following in the footsteps of several former standouts at No. 10 Mercyhurst in wearing the maple leaf in the past 20 years, the sophomore from St. Catharines, Ontario, along with 45 others of Hockey Canada were announced on Aug. 12 to the organization’s Under-18 and Development squads.  After training and group practices, players were provided the opportunity to play for a three-game series against the United States the following weekend.

The Development roster, a consortium of 22 players ranging in ages from 18 to 22, along with 45 other players were invited to a three-day fitness test in May.  After being analyzed by scouts throughout the previous season, players were then called back on July 27 for the full two-week camp at the Markin MacPheil Centre at Winsport’s Canada Olympic Park in Calgary, a competition site for the 15th Winter Olympics in 1988. The camp ran from Aug. 5 to 13.

Vasko was one of three CHA players selected to the game roster, joining Allie Munroe (Yarmouth, NS/Syracuse) and Jaycee Gebhard (Plenty, SK/Robert Morris).  These players complemented a roster featuring 2018 Kazmaier winner Daryl Watts (Toronto/Boston College), and two players from national champion Clarkson, the squad that faced Vasko’s Mercyhurst squad in the NCAA quarterfinals this past March 10.  Seven others were from 2018 nonconference opponents.

The 25 players invited to Development Camp were split into Team Heaney, named for Hockey Canada star Geraldine Heaney, and Team James, with naming rights from Hockey Canada’s Angela James.  “You’re playing with the best players in your country,” said Vasko, who played for Team Heaney. “Therefore everyone is unbelievably talented, which can sometimes question your abilities. I just kept reminding myself that I’m here for a reason, and I’m very grateful it worked out.”

Also on the docket were a series of exhibition matchups against each other, a team of top talent at USports schools from all over Canada, and the Japanese national team. They engaged in a four-game round-robin format.  Team Heaney finished the camp 2-2, defeating Team James and Japan in their first two matches. Vasko and Howard assisted on the second goal of a 2-0 win over Team James on Aug. 6.  Team Heaney fell 3-1 to the USports squad Aug. 9 and to Team James 4-3 two days later in a roller-coaster affair that saw all 14 goals and penalties after the first period.

“I enjoyed a lot of things about the camp and the series,” said Vasko. “The main one is playing for my country and having that rivalry against the U.S. I also enjoyed playing with and being on a team with girls that I play against here at Mercyhurst.”

Despite the split results at camp, Vasko seems optimistic that she will be able to continue her national-team career.  “Right now, I hope to stay involved in the U22 program and hopefully in a couple years, make the jump to the senior program,” Vasko said. “The Olympics are still a long time away, so anything can happen between now and then. I just have to continue playing the best hockey possible here at Mercyhurst.”