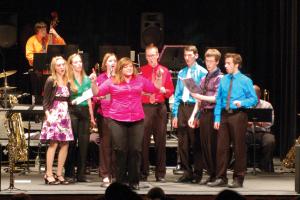 Students, faculty and residents of Erie attended the concert and were not disappointed by the pleasing melodies of last Friday’s concert.

Junior Sarah Blair was one of the students who attended the performance. “The concert was really great. They did an excellent job of performing music that would please a variety of audiences,” she said.

Under Direction of Scott Meier, Ph.D., the ensemble played a variety of music and opened with a saxophone quartet for the first time.

Another first for the ensemble was its new location in Taylor Little Theatre. “The acoustics are the best on campus,” Meier said.

He went on to explain that it would allow the audience to hear every piece of the music clearly without being overwhelmed by sound.

The event had not taken place at Taylor Little before because of concerns about noise levels. Meier pointed out that the theatre is directly below the reading room in the library.

The ensemble played a variety of musical genres. There was jazz, of course, but there was gospel and some rock as well. The sound of every instrument came together in a wonderful and professional way that left the audience wanting to hear more.

This was more than just an instrumental concert. Vocal performances added words to selected pieces of the music.

Senior Lauren Haines, one of the vocalists, performed the gospel rock song “Operator” as well as several other songs.

“Lauren has an incredible voice. It is unique, which added an extra flair to the concert,” Blair said.

The Mercyhurst Jazz Ensemble did its best to highlight the talents of several of the graduating seniors taking part in the ensemble, and the students shined brightly as they played their solos or sang the vocals.