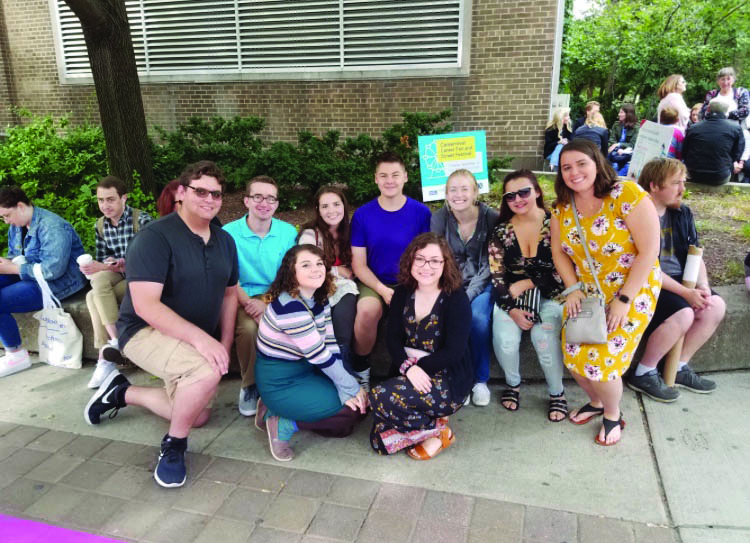 The Toronto International Film Festival (TIFF) is one of the largest and most highly regarded film festivals in the world.
Each year, TIFF welcomes nearly 480,000 movie-goes. This year’s crowd included Kristofer Gossett, adviser of the Modern Cinema Club, four Mercyhurst alumni, 17 students and two parents.
For a second year in a row, the club attended a portion of the festival, from Sept. 7 to Sept. 9.
“The main components of the festival were the same but the movies are obviously completely different,” Gossett said.
“It was different for a lot of us that went last year because we actually knew where we were going this year and were able to plan the itineraries for everyone more easily.”
He emphasized his desire to allow everyone in the club to see the movies they want, and with such a wide variety of cinematic opportunities, there is sure to be something to satisfy every movie fan’s taste.
Fortunately, the majority of the club members were able to get tickets to the movies they wanted to see at the ticketing window.
The screenings attended included “Outlaw King,” “Beautiful Boy,” “The Sister Brothers,” and a preview screening of “First Man,” which Gossett described as “jaw-dropping.”
The club was also able to attend the world premieres of “White Boy Rick,” “The Hummingbird Project,” “The Front Runner” and “Halloween.”
“The best time I had was at the midnight world premiere of ‘Halloween’ on Saturday night,” said Gossett.
“The crowd was energetic, and seeing Jamie Lee Curtis at the premiere was really great, too. Honestly, this year all of the movies I saw were really good.”
The festival was certainly a star-studded event, with many of Hollywood’s biggest names making an appearance: Matthew McConaughey, Hugh Jackman, Alexander Skarsgard, Jesse Eisenberg, Salma Hayek, Danny McBride and Judy Greer.
Damien Chazelle, director of the movie “First Man” about the life of Neil Armstrong, brought his entire production crew, including one of Armstrong’s sons and an Apollo 15 astronaut.
This provided students with an incomparable experience to not only see movies prior to their release, but also be part of the action with their proximity to celebrities and attending various panels.
Class of 2018 alumna Sydney Van Leeuwen had the opportunity to attend the industry conference.
“It allowed me, an aspiring filmmaker, the opportunity to talk to people who actually work in the film industry,” she said. “I learned from a few industry contacts that it might be in my best interest to attend film school if I want to get involved in the filmmaking business.”
Overall, Gossett found the experience to be both positive and beneficial for all who attended.
“This is great as it expands their ideas of what movies can be and students have the freedom to see foreign language films or short films or even documentaries if they want to (all of which students did this year),” he said. “I hope students get a bigger appreciation for film as an art form in addition to having an amazing time in Toronto.”
This enjoyment is what Gossett recognizes as his favorite part of the trip.
“For me, the highlight of the trip is always hearing how much fun the students have, especially the ones that are at Toronto for the first time,” he said. “It’s a lot of work to put this trip together, but listening to everyone talking about all the fun they had and the lifelong memories they’ve made is the best part of my trip.”