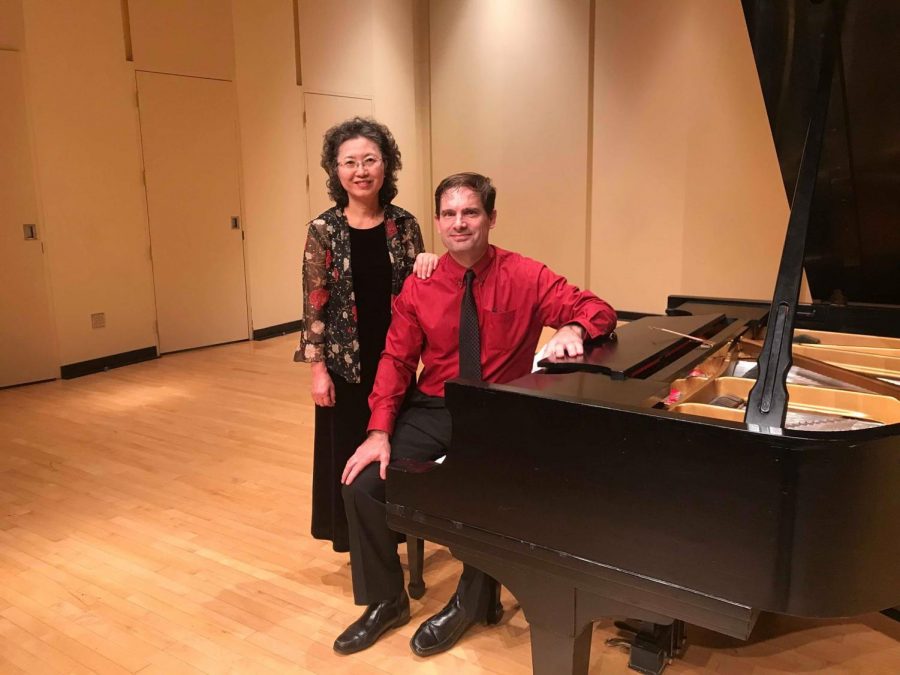 The 30th season of the Roche Guest Artist Series kicked off with the incredible husband-and-wife piano duo, Hyun Ju Curtin, D.M.A., and David Curtin, D.M.A.
The recital took place on Sept. 10 in Walker Recital Hall.
The program included Sixteen Waltzes for Piano Duet, op. 39 by Johannes Brahms (followed by a brief intermission), Three Military Marches, op. 51 by Franz Schubert and “Five Hungarian Dances” arranged by Brahms.
First and foremost, kudos to Hyun Ju Curtin for performing this recital with a wrist brace. She still managed to perform each piece with dexterity and finesse.
David Curtin introduced the first piece by describing the Romantic era in which it was written.
He emphasized that the Romantic era is not about a candlelit dinner.
As we know, it is a celebration of the composer’s emotions and persona and, well, it can also be romantic.
According to David Curtin, at that time the waltz was a new dance and it was somewhat scandalous because of how close dance partners would be – about as close as the hands in the piece.
The “Sixteen Waltzes” was a wonderful piece written for four hands.
As the duo performed the piece, I could picture 19th century dancers circling around each other on the dance floor in the signature three-four time.
The first waltz in B major was very light and playful as any dance would begin.
Once the key changed to E major for the second waltz, I got goosebumps as the melody slowed to a very full and luscious sound.
It almost resembled a lullaby.
As each waltz passed, it felt as if it were going through a cycle flitting from the light and playful melody back to its full developmental theme.
A notable waltz was the Waltz in C sharp Minor.
As they performed this piece, I could picture Cinderella and her Prince Charming waltzing across the dance floor, eyes locked as if there were no one else in the ballroom.
Cheesy, I know.
After intermission, the duo performed Three Military Marches, op. 51 by Schubert.
It was not as memorable as the other pieces but this is probably because I could not wait for them to perform the “Hungarian Dances.”
The overall piece reminded me of a fanfare for the troops coming home after winning a war.
The third movement seemed like it should be the background of a training montage for the underdog of the story.
On to the greatest performance of the evening, the first five of Brahms’ “Hungarian Dances.”
David Curtin mentioned that Brahms signed the overall piece as an arrangement rather than his own composition.
This is likely due to the inspiration of traditional Hungarian folk music and Romani music.
Being part Hungarian and Romani myself and learning some of the traditional folk dances when I was younger, this piece spoke to my soul.
They did an amazing job with their interpretation of most of the dances.
I am not sure how I felt about Hyun Ju Curtin’s interpretation in her part as Piano One for the first dance.
It is a dance that is supposed to flow with each sprinkle of the keys in her part.
Instead, we waited with bated breath for her to roll out the espressivo notes after the sforzando piano leggero in her part.
Other than that, their performance was excellent.
Seeing the Curtins cross hands on the piano while maintaining time and composure illustrated their skill.
Out of the five pieces, the second had a more Roma vibe than the rest, which really showcased the roots of the work.
There were elements of Czárdás in the fourth dance; the traditional Hungarian folk dance popularized by Romani groups traveling throughout Hungary and neighboring countries.
It was also popularized by Italian composer Vittorio Monti.
They really encapsulated the fifth dance in their performance.
Even though it is not technically a traditional folksong, it is still a popular piece.
It was a wonderful close to the evening as it begins with a quick tempo which soon escalates into a frenzy of notes.
The piece was full, bright and energetic and could probably close out any concert leaving attendees with a sense of bewitchment.
Perhaps the Mercyhurst Civic Orchestra will close out one of their concerts this season with Hungarian Dance No. 5?
A girl can only dream.
All in all, the recital was a success.
It was greatly received by the audience and it was a magnificent beginning to this season of the Roche Guest Artist series.