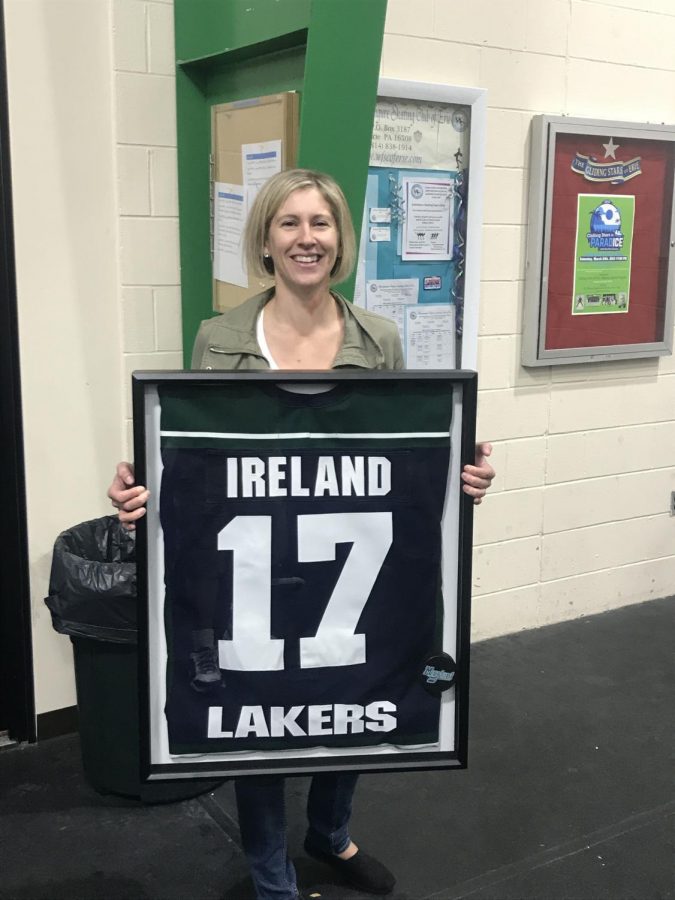 The stars aligned on Saturday night at the Mercyhurst Ice Center, where the Mercyhurst women’s ice hockey program celebrated its 20th anniversary and honored its storied past.

Before the current iteration of the program faced the Canadian Women’s Hockey League’s Markham Thunder, a ceremony honored the program and former players, including such notable names as Vicki Bendus, 2010 winner of the Patty Kazmaier Memorial Award, given to the top female college ice hockey player in the U.S.; CJ Ireland, a four-time captain; and members of the Class of 2003, the program’s first.  The ceremony concluded with the retiring of Ireland’s No. 17, a number that hadn’t been issued since 2007 but was not formally retired until Saturday night.

The retirement marks the third in as many years for Laker athletics, succeeding Ryan Zapolski (men’s hockey) in February and David Lough (baseball) in 2016. Mercyhurst hockey player Scott Burfoot’s number was retired in 1996.  “It’s a huge honor, (regarding)the number of players that walked through these doors, and to be honored among them is pretty special,” said Ireland. “I can only assume that (Zapolski and Burfoot) are a great group to be honored amongst.”  After the ceremony, the current team squared off with the Markham Thunder.

The Thunder proved slightly too much to handle for the No. 10 Lakers, taking a 3-1 victory and scoring all of their goals before the third period.  However, the contest was a necessary experience for the team, especially the five incoming freshmen, as preparations continue before the season opens in Minneapolis on Sept. 28.

“I’m just going to rest and get ready mentally for Minnesota and just come out strong, and I want to be more confident on the ice,” freshman Liliane Perreault said after her first collegiate action. “I definitely want to keep improving my game, my skills, (my skating), but for my first game, I can take a lot out of it and keep working hard.”

Starting one of those freshmen in Emily Pinto did not appear to backfire on Lakers head coach Michael Sisti, however, as the Thunder beat goalie Kennedy Blair for the first time early, but not in that opening shift.  The Thunder’s Jamie Lee Rattray went unassisted just 3:46 into the contest, but the Lakers would only allow five more shots in the first period of their sole preseason contest.
The passing began with Pinto finding Molly Blasen before Emma Nuutinen found the equalizer with 12.8 left on the clock.

But the Thunder were quick to flip the script in the second, sending Perreault off for a hold at 7:03 and Vilma Tanskanen for a slash three minutes later before the Thunder’s Daniella Matteucci beat Blair just 31 seconds into the advantage.  They duplicated the feat with 1:15 remaining in the second after Laker Summer-Rae Dobson was booked for hooking, as the Thunder’s Jenna McParland and Taylor Woods combined to find Nicole Kosta.  The Thunder then built a 16-8 shot advantage over the first 40 minutes, a margin that would be reduced to five by game’s-end.

“I think we’re just getting the puck deep and forechecking hard on them that seemed to overwhelm them a little bit. I don’t think their defense could handle it, maybe, as well as we could in our end,” Matteucci said.