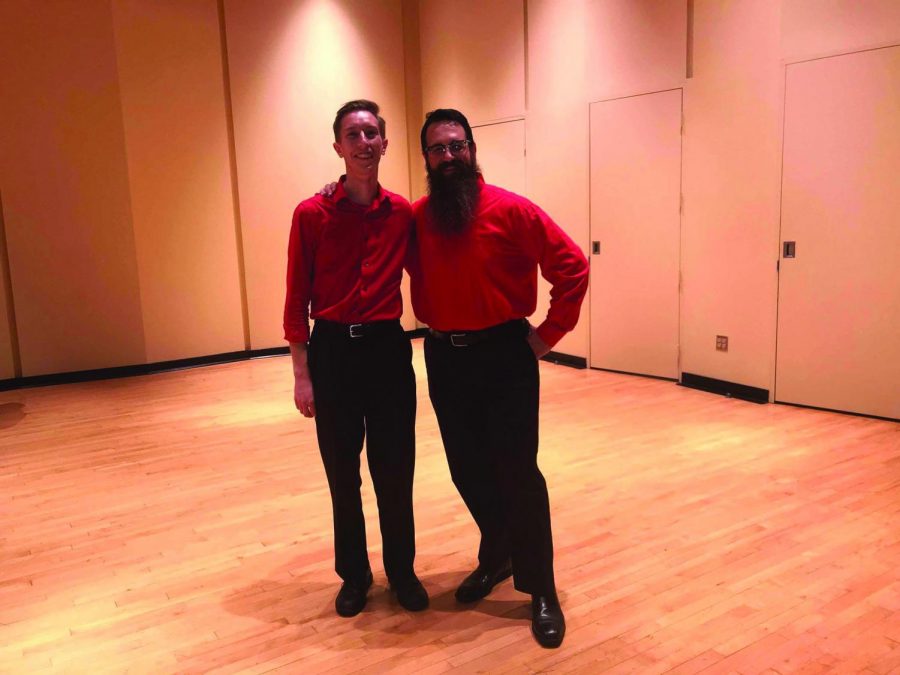 On Sept. 19 at 8 p.m. in Walker Recital Hall, Jonathan Moser, violin, and Kellen Degnan, cello, successfully commenced this season’s Faculty Recital series.
The program consisted of alternating duets and solos.
They began the program with Duo for Violin and Cello, H. 157 by Bohslav Martinů.
This was a wonderful piece.
The chords played by Moser in the beginning of the piece evoked a sense of anxiety that put one on edge.
In the first half of the second movement, it felt as if each instrument’s line was telling its own story that intertwined and danced around the other until they met toward the end.
They reached a similar point of tension and then faded together as they closed out the first movement.
The second movement was very frenzied and erratic.
There were points where the cello would seemingly chase the violin into a crescendo until they reached a beautiful harmony together.
The cello solo was beautifully executed.
However, I found it a bit odd that Moser turned the page for Degnan when they had a page turner there.
As the cellist ended his solo with a trill, he successfully passed the “bow”ton to Moser to carry on the melody.
As they neared the end of the piece, they exchanged glances.
When it was time for the second piece, Moser stepped away for the cello solo “Seven Tunes Heard in China” by Bright Sheng, which consists of seven movements.
Each movement is attributed to the different provinces of China and their specific folk music.
Degnan described it as the composer having “incorporated Chinese folk tunes into this Western Classic medium.”
The first movement, “Seasons” was a beautiful romantic movement about spring, and it was very light and playful.
The fourth movement, “The Drunken Fisherman,” is Degnan’s favorite because it is humorous.
Degnan used a guitar pick in this movement, which reminded me of the guzheng.
Degnan explained that the fifth movement is about a train, and he really brought it to life.
The emphasized and robust plucking reminded me of the theme to Robert Downey Jr.’s “Sherlock.”
The sixth movement, “Pastoral Ballade” was absolutely gorgeous, and it gave me chills.
In the brief pause after this movement, it was so quiet you could hear a pin drop.
These were my favorite moments in the recital.
It truly speaks to an artist’s skill when the audience is so enthralled that they hang on to every note and hold their breath as they wait for the following movement.
Moser then took the stage for a solo performance of Partita No. 2 in D minor, BWV 1004 by Johann Sebastian Bach.
Each movement in the “Partita” represents a dance from that time period.
This piece is one of my favorite pieces in the violin repertoire.
Before Moser began, he did a little show-and-tell with the “Chaconne” and illustrated how it is technically only a few notes played in variation.
The most notable movement is the “Chaconne,” as it is often referenced in pop culture.
In “Sarabande,” Moser highlighted the chord progressions beautifully.
Some of the phrasing seemed to imitate the standard folia because it reminded me of Arcangelo Corelli’s “La Folia,” which is influenced by the late folia chord progressions.
An amazing aspect of this piece is how the first movement, “Allemande,” introduces the distinguished melody in a softer and loving manner.
Bach then brings back the melody in a harsher, more biting tone in the “Chaconne,” which concludes the cycle.
The recital ended with “Duo for Violin and Cello” by Erwin Schulhoff.
The two performers mentioned that it was a “wickedly hard piece,” yet they managed to perform it seemingly without effort.
The first movement began very softly and melodically, but then the pace became frenzied.
It finished with the initial slow tempo.
The second movement was said to have been inspired by typical Romani themes.
This included left-hand pizzicato, which was plucking perfect.
The third movement maintained the same artistry and intensity.
Typically, an accompanist looks at the soloist for cues.
As they glanced at each other, it was evident that they were truly accompanying each other.
If this recital is a prelude to the rest of the Faculty Recital series this season, then it is surely something to look forward to.