This year, Mercyhurst welcomes Mahesh Maddumala, Ph.D., to the Cyber Security department as an assistant professor of Computing and Information Science.
Maddumala has a strong background in cyber security and various mobile technologies.

From there, he went into the industry as a software engineer for Aricent Group, a multinational software company. Maddumala worked his way up to Senior Software Engineer in the firm.

In 2013, he reentered academia as an assistant professor for Sanketika Vidyaparishad Engineering College in India. For one year, he taught courses such as Cryptography and Network Security.

In 2014, Maddumala enrolled in a Ph.D. course in Computer Science at the University of Missouri-Kansas City. At the same time, he became a research assistant for the university and began to widely contribute to various conferences, journals, research projects and more.

Maddumala has mostly worked with various phone companies such as AT&T and Sprint, from Austin, Texas, to Bangalore, India. His main research areas are cyber security, network security and information security.

When discussing his projects, he spoke of the importance of pride and enjoyment in work.

“I am proud of any work that I am doing. For now, it is setting up a cyber lab for the students,” Maddumala said.

This semester Maddumala is teaching Intro to Cyber Security and Cyber Information Security 501: Probability and Statistic.

Maddumala resides in Erie and spends his free time pondering philosophical questions of life and playing with his kids. 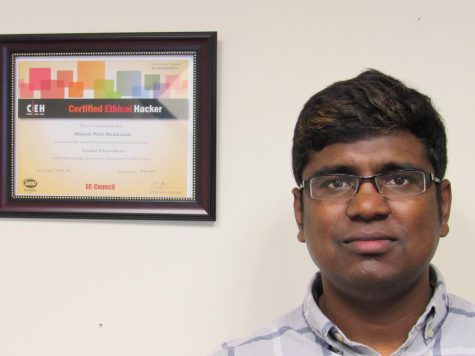