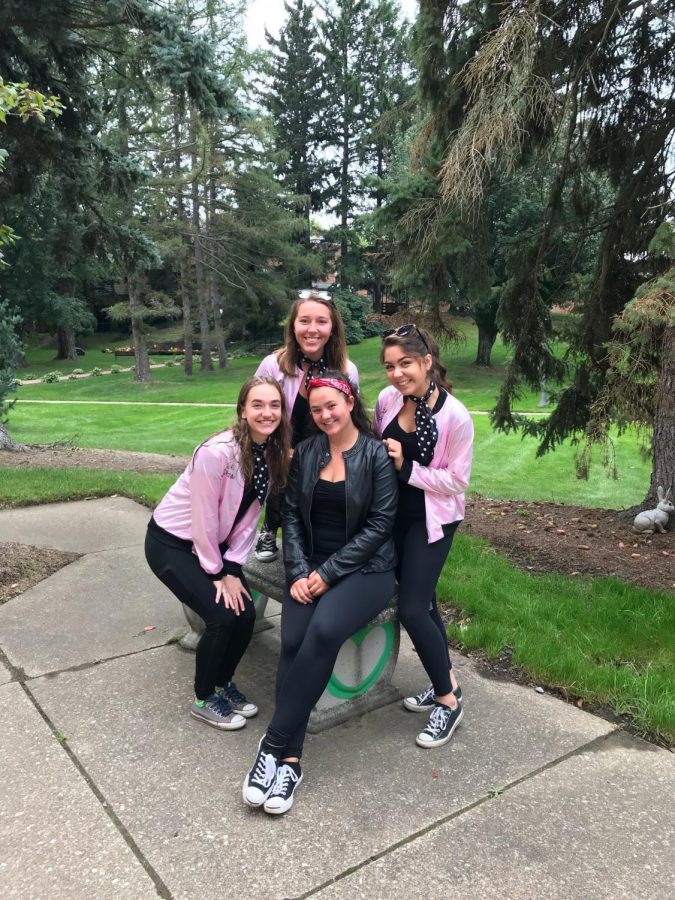 The long wait for Hurst Day finally paid off last week, when the rain didn’t deter the Mercyhurst students and staff from enjoying all the food and activities that were offered.

Hurst Day was announced with 7 a.m. bagpipes on Oct. 1, and as usual, took many by surprise. The bagpipers entered the McAuley, Baldwin, Warde and Ryan residence halls to the delight of the students, many of whom captured the moment on social media.

“I was overjoyed when I heard” the bagpipes, said Brenden Jackett, sophomore Intelligence Studies major.

The second part consisted of a crossword puzzle involving slightly less running as clues were limited to the areas of Old Main, Trinity Green and Munson Plaza. It was during this round that it began to rain, adding an additional challenge for the participants. At the conclusion of the crossword round, the top three teams qualified for the third and final round.

“Quad Squad 2.0,” consisting of sophomores Kyle Onderko, David Steets, Sydney Zajac and Julia Wrest, advanced, as well as “The Pink Ladies,” consisting of Lucy Belleau, Erika Hermanson, Sam O’Connell and Sarah Klein. Fellow sophomores Marina Boyle, Fez Ur-Rahman, Emma Farrell and Kristian Trebilcock formed the final addition as the “Shark Family” team.
Each gathered in Christ the King Chapel to compete against one another in answering questions about the Mercyhurst faculty. At the end of the round, which went into the bonus questions, The Pink Ladies were victorious.

“I couldn’t believe we won. It was the highlight of my day,” Belleau said.

As an Education major, Belleau’s team also had Intelligence Studies and Forensic Science majors, widening the knowledge bases to draw on. The final round allowed one “phone a friend” opportunity when each team was stumped, meaning the crowd could get involved, too.

This year’s Hurst Day theme was musical groups. The food stations were themed after mostly ’80s and ’90s bands. These included the Backstreet Boys, Zac Brown Band, Kiss, Spice Girls, Beach Boys and U2. This theme proved popular with students.

“I thought they were creative and well-thought-out, and there was a wide variety of style and selections,” Hermanson said.

There was also a variety of inflatable activities for the students to enjoy. The highlights included the inflatable race, stunt fall, laser tag, inflatable Hungry Hungry Hippos, a wrecking ball and the photo booth. The stunt fall gave students a chance to plunge 20 feet from a suspended platform onto a trampoline surface. The puddle that the rain caused only added to the amusement and the splash zone for viewers. Although it rained throughout the afternoon, there was good turnout from both students and staff.

O’Connell, an Education major, had a clear favorite in terms of games. “My favorite activity was Meltdown,” O’Connell said. “The rain really added to it. My friends and I couldn’t stop laughing.”
The day concluded with a steak dinner at both Grotto Commons and Ryan Hall.

On a whole, this year’s Hurst Day was very successful. Sarah Allen, director of Campus Involvement, was enthused by the usual student excitement towards the day.
“Despite the rain, I think the students really got excited. They embraced getting wet,” Allen said.

Jackett agreed. “I had a lot of fun throughout the day, and even though it rained people still came out and had a great time,” he said.

Hurst Day carries its tradition from 2015, when new President Michael T. Victor came up with the idea to bring the Mercyhurst community together for a day of fun.
He was inspired by similar events that take place at other colleges and universities throughout the East Coast but added touches like bagpipes and inflatable games to make it unique to Mercyhurst.

Since the first Hurst Day in 2015, the day has grown bigger and bigger each year. Now almost everyone participates in the festivities. The scavenger hunt continues to grow, and costumes get more original. The food has also become more creative, with inflatables even more spread out.

Planning for each year’s Hurst Day begins in August when the committee meets to work on potential dates and themes. Because each member of the committee has a different task, nothing is too taxing for each individual. “The hardest part is always keeping it a secret,” Allen said.