Kelly and DiNicola face off in only scheduled PA-16 debate 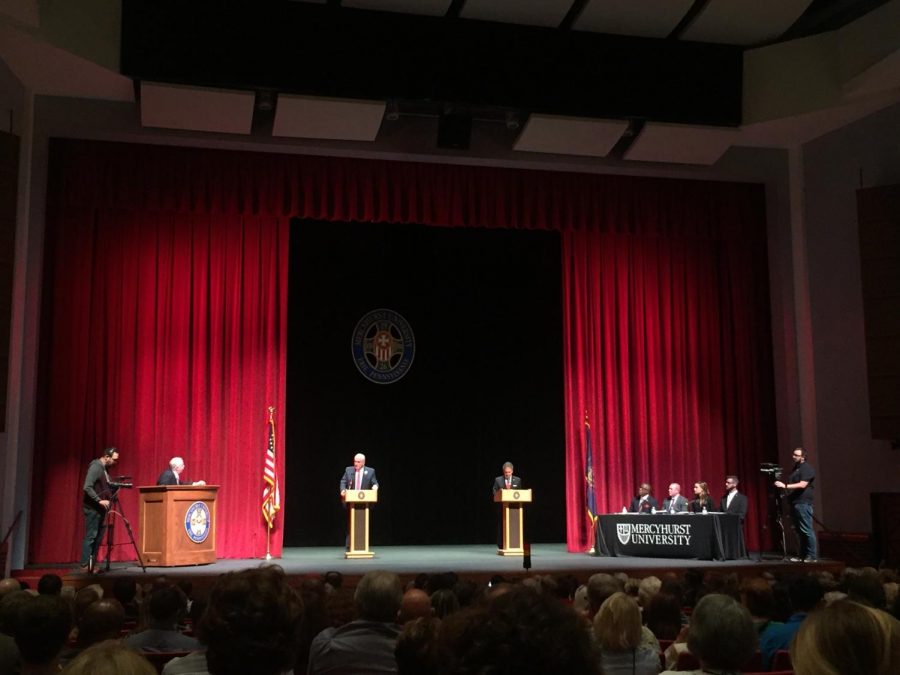 On Oct. 8, incumbent Republican U.S. Rep. Mike Kelly and Democratic challenger Ron DiNicola met in the D’Angelo Performing Arts Center to debate critical topics before the upcoming 2018 election. This session was the only scheduled debate between the two candidates for Pennsylvania’s 16th Congressional District.

WJET-TV anchor Sean Lafferty moderated the candidates as a panel of four members of the Erie community posed questions critical to the platforms of both potential congressmen. Each member of the panel asked multiple questions about topics such as the increasing national debt, immigration policies, Supreme Court Justice Brett Kavanaugh’s nomination, corporate tax cuts, gun violence, the labor force, education and the possibility of bipartisan compromise.

Kelly, a member of Congress since 2011, began the opening statements reminding the audience of the value of debates between two very different candidates and how this was going to play out over the next hour.

DiNicola, a Marine veteran, opened his remarks emphasizing his priority in meeting and learning from the people to improve the federal government.

“The sentiment was always the same and that is that Congress is corrupt. It’s not working for us. And they are right,” DiNicola said.

Both candidates agreed on some stances, but differed in how change should be implemented.

Kelly believes that the United States should not be solely responsible for taking action against climate change, but should work together with other countries on a global scale. DiNicola is in favor of the United States taking on a leadership role to protect the environment.

DiNicola and Kelly agreed that changes must be made to help reduce the amount of minority incarceration in the United States through more educational opportunities and recovery programs. When asked about violence against unarmed African Americans versus unarmed Caucasians, DiNicola hopes to prevent these violent actions all together. Kelly agreed in stating that all people’s lives matter from all backgrounds and at all stages of life.

It was clear where the candidates were in oppositional views.

Kelly is in support of the changes brought about by the Trump administration, believing that the economy is steadily improving. He reminded the audience of the issues the nation is facing today in terms of immigration and national debt that have been of debate even since the Obama administration.

DiNicola disagrees with some of the actions of the Trump administration but hopes to work with the president to close the corporate tax loophole in benefit of the middle class as well as in compromising an immigration policy that protects the U.S. border.

DiNicola is in firm support of bipartisan legislature and coming to “common sense solutions” on these pressing issues.

In a lighter question, both candidates looked to U.S. history when asked what past leader inspired them most. Kelly favored the traditionalism of Ronald Reagan, while DiNicola admired Franklin Delano Roosevelt’s civility and multilateralism.

Over the course of the hour, Kelly and DiNicola were vocal about their stances, but did not hide their distaste for actions taken by their opponent in past legislation and current policies. They both were firm in presenting all of the information about their opponent, good or bad, to their voters.

Kelly commented that it is essential to setting yourself apart in the political field.

The audience was vocal with its own opinions of both candidates, often exclaiming in positive or negative comments in response. Lafferty often was forced to remind the audience and candidates to remain impartial with commentary to “allow the information to digest” for everyone in attendance.

In their closing remarks, DiNicola and Kelly reemphasized their most important values in their candidacy.

For DiNicola, he is looking to work with the people of Pennsylvania to create more bipartisan legislature.

“My responsibility tonight is to give you a choice in exercising that power. I will make this simple pledge, if you send me to Congress, I won’t disappear. I will fight for you,” DiNicola said.

Kelly gives the power to the people as well, reminding them about the importance of strong and experienced leadership.

“I don’t care if you are a registered Republican or registered Democrat, more than anything else, how much has your life changed in the last 21 months? We are no longer just part of the world, we are leading again because of strong republican leadership,” Kelly said.

While the third party candidate, libertarian Ebert Beeman, was not in attendance due to predetermined criteria by WJET-TV, he will be on the ballot for representative of the 16th District in the upcoming election.

The debate was televised on WJET-TV as well as live streamed on their Facebook page, encouraging voters to comment questions for the candidates. It was also recorded by WQLN and C-SPAN to be broadcasted at a later date.