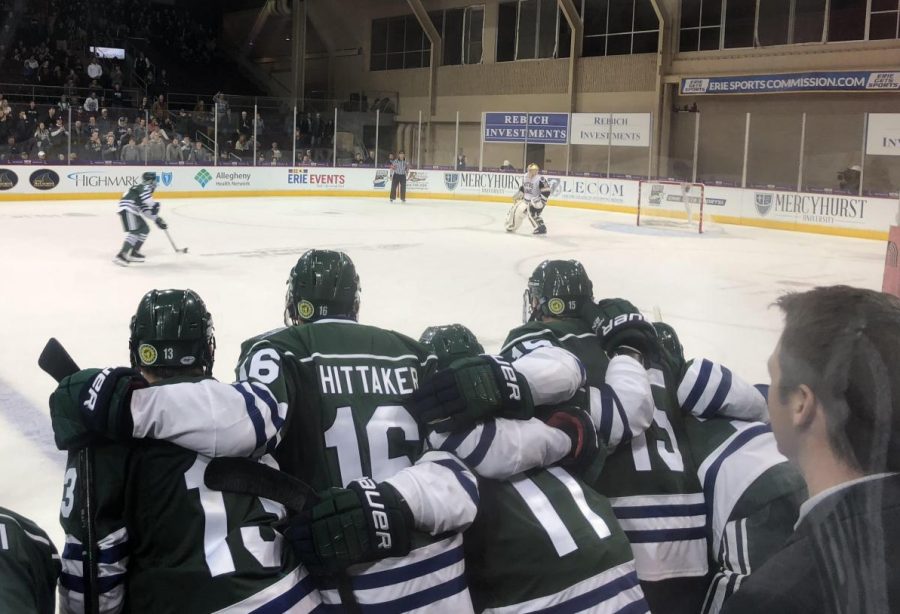 No. 13 Josh Lammon, No. 16 Matthew Whittaker and No. 15 Tommaso Bucci look on during the shootout at the end of the Mercyhurst-Notre Dame game. The game officially ended in a 6-6 tie.

By the time the ice settled on Oct. 13, the Erie Insurance Arena had seen four teams battle out over four games.

The Icebreaker Tournament, which was announced to be hosted by Mercyhurst last fall, drew sports fans from across the Northeast as Providence College, Miami University of Ohio, Notre Dame University and the hosting Lakers battled for dominance in the college hockey season opener.

“The tournament was a culmination of a lot of hard work by a number of groups and individuals that are dedicated to growing college hockey and the Mercyhurst brand,” Mercyhurst Athletic Director Bradley Davis said. “About 1,000 students attended Friday’s game against Notre Dame, and I was fortunate to meet many alumni and local supporters who came out for the event.”

The games officially began at 4 p.m. on Oct. 12 with a game between Providence and Miami of Ohio.  Providence ended up shutting Miami out with a 4-0 victory to begin the games.

Following the first game was the marquee event between the Lakers and No. 2 ranked Notre Dame.  Beginning at 7:30 p.m., the contest drew scores of students and members of the local community.

At one point, the Lakers lead 4-2 over Notre Dame, but the two teams entered overtime tied 6-6.  After an overtime period failed to produce a result, the two teams went to a shootout.
Three slapshot attempts into the shootout, Notre Dame scored and took the game.

“They played tough, they gave us all they got, and it was right down to the wire,” Notre Dame’s Andrew Peak said.  Notre Dame would go on to shut out No. 4 ranked Providence 3-0 to win the tournament, but their fight with the Lakers turned a lot of heads.  “Notre Dame was the No.2 Division I program in the country (they are now the No. 1 team in the country) and we played to a tie in front of over 4,000 people,” Laker Head Coach Rick Gotkin said.

All in all, the Icebreaker tournament showed well for Mercyhurst and the Erie sports community.  “Everyone we spoke with at Notre Dame, Providence and Miami had great things to say about the community, the facility and the tournament,” Ed Snyder, Assistant Director of Sports Facilities for Erie Insurance Arena, said. “Hopefully we can use events like the Ice Breaker Tournament to attract other national and international events to the Erie region.”