Faculty recital was a success 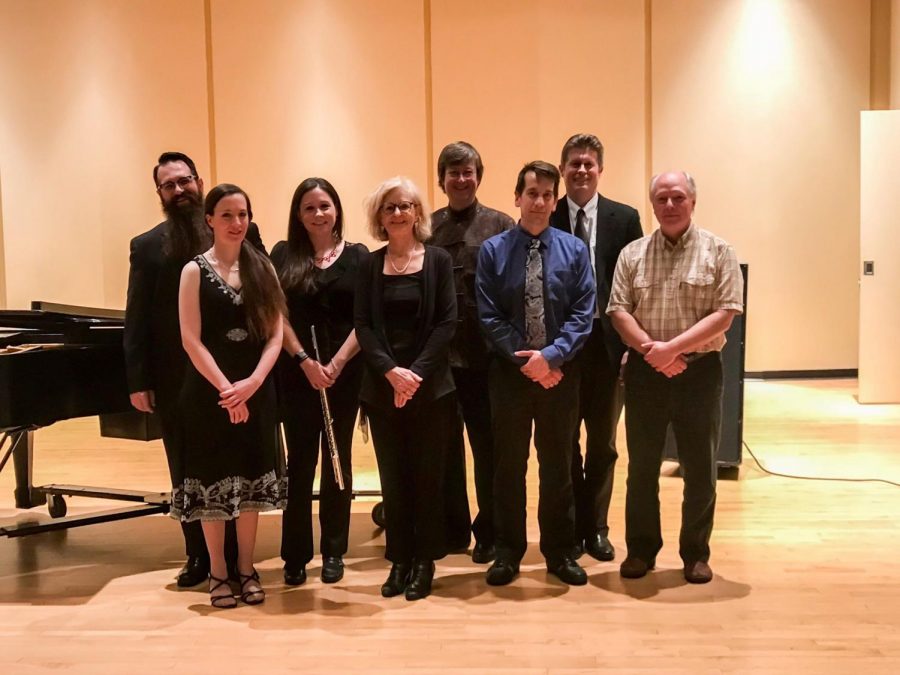 Once again, the Mercyhurst D’ Angelo department of Music showcased its talented faculty in its annual Faculty Collage.
The recital took place on Oct. 17 in the Walker Recital Hall.
The program opened with the delightful “Rivolgete, a lui lo sguardo” from Mozart’s “Cosi fan tutte” featuring Royce Strider, baritone, and Nathan Hess, D.M.A., on piano.
They remained in perfect synchronization throughout the entirety of the aria.
As Strider sung in Italian about dancing, he showcased his own graceful dance moves.
The second piece on the program, Vals, Op. 8, No. 4 by Agustin Barrios Mangore, was performed by Jonathan Nolan on guitar.
It was a very pleasant performance.
The iconic Latin melodies were intertwined in the piece.
It brought warmth to Walker, and I could practically feel the sun on my face as the notes swirled around me.
Sonata for Alto Saxophone and Piano, Op. 19 by Paul Creston was next on the program.
This piece was performed by Scott Meier, Ph.D., on the saxophone and Hess on the piano.
Meier introduced this piece by mentioning that “every saxophonist has to play this piece.”
They only played the second movement, “With Tranquility,” which held true to its name.
As the smooth saxophone notes fluttered through the air, I could not help but think this would be a great piece to use to serenade someone.
The following piece, “1040,” by Nathan Barber, was very unique.
It was an electronic piece created through a conglomeration of everyday things such as a vacuum cleaner, chime clock, lawnmower blade, chandelier piece being dropped and dog dishes
It had a very modern edge to it, and Barber suggested the audience close their eyes to be fully immersed in the experience.
As I did, I felt as if I were in a video game where the big boss music comes on, but you don’t see anyone around you so you start to panic.
The “Suite Italienne for Violin and Piano” by Igor Stravinsky followed the “1040.”
Only three of the six movements were performed by Moser on violin, and Elizabeth Etter, D.M.A., on piano.
This was a gorgeous piece and it was beautifully executed.
The strong first movement, “Introdzione,” set the tone for the rest of the performance.
The second movement, “Seranata,” was very mystical and soft.
As the melodies swirled around the hall, it was evident that it had influenced the music of “Harry Potter.”
The fourth movement, “Gavotta con due variazioni,” was light and airy.
The audience was mesmerized with each lilting grace note.
The penultimate piece on the program was “Sonata for Clarinet and Piano” by Francis Poulenc.
This lively piece was performed by Rebecca Wunch, clarinet, and Etter, piano.
Only the third movement, “Allegro con fuoco,” was performed.
As Wunch observed, the piece was reminiscent of a circus.
As the movement progressed, each circus performer was brought to life.
From the ringers to the clowns, it was a very bright and melodic piece.
The recital came to a close with “Fantasie Brillante on Themes from Bizet’s Carmen” by Francois Borne. The piece was performed by Amanda Sage on flute, and Etter on piano.
As Sage and Etter bounced the notable pieces from “Carmen” between their instruments, this piece was a splendid, graceful way to end the recital.