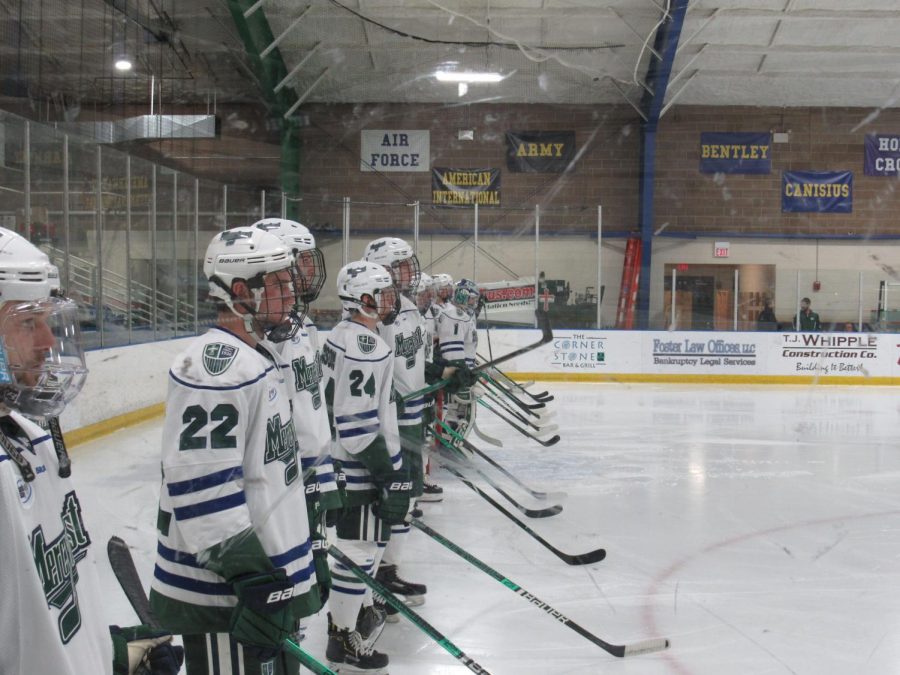 he Lakers line up at their end of the ice before the start of the game against Army West Point.

Unfortunately, the Mercyhurst Lakers men’s ice hockey team fell short this weekend as they hosted Army West Point on Oct. 26 and 27 at the Mercyhurst Ice Center.

On Oct. 26, the Lakers fell 1-5 to Army. The Lakers’ only goal was scored by Ethan Johnson.  Johnson got the Lakers on the board at 3:15 of the first period, with an assist from Devon Daniels.
The Lakers held the lead, but it did not last long.  Six minutes later, Army answered the Lakers goal and tied the game.

On Oct. 27, the Lakers suffered an overtime loss to Army West Point, 3-2.  Dalton Hunter got the Lakers on the board first with a power-play goal with assists from Taylor Best and Joseph Duszak.
The Lakers strengthened their lead with a goal from Matthew Whittaker, assisted by Derek Barach and Josh McDougall.  The Lakers started the third period with a 2-0 lead over Army.  However, Army found its way onto the board early in the third period with a power-play goal to answer the Lakers.  Michael Wilson found the back of the net for Army with 10.1 seconds left in regulation.
The play was initially put under review but was deemed a good- goal.  With the teams 1:37 into overtime, Michael Wilson netted one for Army, ending the contest.   Cantali was in net for the Lakers, making 30 saves.

The Lakers were 1-for-7 on the power play while Army was 2-of-7 for the game.  “We just have to keep working hard and keep battling and find a way to get better,” head coach Rick Gotkin said following the back-to-back losses against Army West Point.

The Lakers return to action on Nov. 2-3 against Rochester Institute of Technology at the Mercyhurst Ice Center.  Puck-drop is 7:05 p.m. both nights.