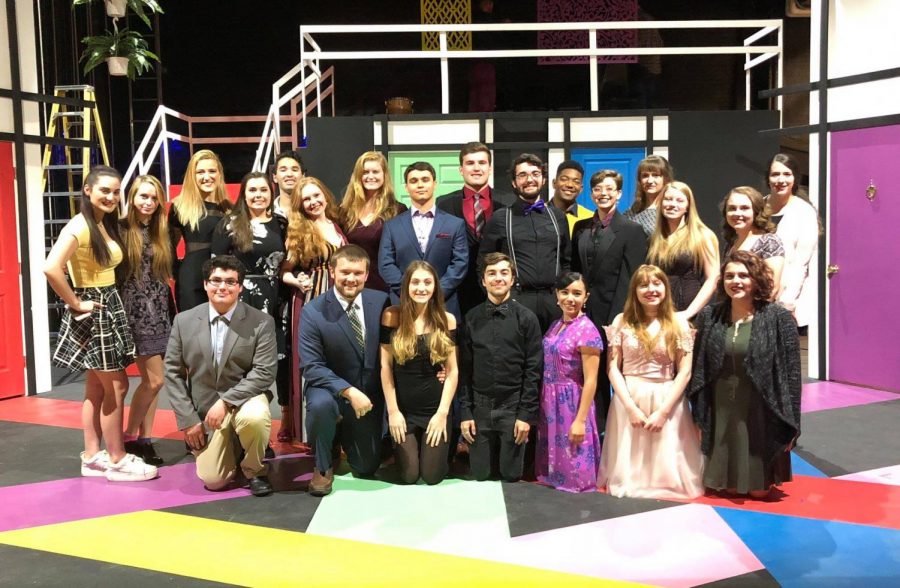 “Women on the Verge of a Nervous Breakdown” was a tremendous success.
The musical, based on the 1988 Spanish romantic comedy, was filled with well-put-together songs and the full spectrum of emotions.
Alexis Webb (senior, Music) starred as Pepa, a small-time actress who begins to unravel after her boyfriend Iván, played by Jacob Tretinik, (senior, Biology) suddenly moves out, leaving a vague message on her answering machine.
The matter becomes complicated with the introduction of Lucía, Iván’s ex-wife, and Carlos, their son, played by Owen Hitt (senior, Information Technology).
Lucía, played by Abby Larimore (senior, contract major), was hilarious with a tall black wig and cat-eye sunglasses.
Though she is suing Iván for the stolen years, she still loves him and vindictively sets out to get revenge on Pepa, his mistress.
Carlos and his fiancé Marisa, played by Erin Fink (senior, Biochemistry), are searching for apartments, and this search leads them to the home of Pepa.
Pepa is at first unaware of Carlos’ connection to Iván, but it comes out.
Another character is Candela, played by Rosie Pregler (senior, Anthropology and Public History).
Candela, Pepa’s best friend, is a model who unknowingly becomes romantically involved with a terrorist, Malik, played by Chance Wandler (freshman, Criminal Justice).
These players come together on Lucía’s day in court when they all end up in Pepa’s apartment.
The plot becomes more complicated with the addition of sleeping pill-spiked gazpacho, a man-hunt for the terrorist Malik, the news that Pepa is pregnant and the introduction of Iván’s surprising new lover.
The musical comes to its conclusion when Lucía – aiming at Iván – shoots Malik, after Pepa saves Iván from the bullet.
Iván realizes that he wants to be with Pepa, but Pepa knows that she must let him go.
The final song is an emotional harmony between the four women who all look forward to the future.
The musical, set in Madrid in the late 1980s, had masterfully performed songs that combined traditional Spanish and contemporary rhythms.
Each song was catchy, and the variety of emotions kept it engaging.
The strong cast delivered lines flawlessly, and the audience was at different times laughing and sharing the pain of the main character’s problems in love.
I remained engaged throughout the entire performance, since there were several twists in the plot. The songs were exciting and well performed, and I was kept laughing at the lines and foils of the characters on stage.
The Taylor Little Theatre was filled almost to maximum capacity and the audience reacted well to everything they saw.
A round of applause for the Mercyhurst Theater department!