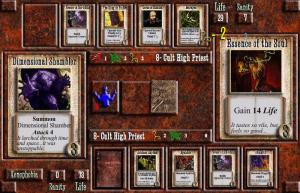 Pros: Free, true to the story, fun for anyone who is into horror, and good artificial intelligence

Cons: Can be frustrating

If you are a Magic: The Gathering fan, an H.P. Lovecraft fan, or just an overall horror fan YOU WILL LOVE THIS GAME!

Necronomicon is a computer card game made by Games of Cthulhu, a company dedicated to finding and creating games based off H.P. Lovecraft’s “Call of Cthulhu.” The game can be found at www.kongregate.com/games/GamesofCthulhu/the-necronomicon.

It is a simple game to play: You go up against the computer in a battle of wits, and whoever has their “life points” depleted down to zero first loses.

The soundtrack is enjoyable and sets an eerie mood. The combination of the art, music and story gives players an overall feeling of the insanity and horror toward which writers of the Cthulhu stories and the game designers are aiming.

In the game, there are two things players should take care of – life and sanity. This is important for all Cthulhu fans because in every Cthulhu story Lovecraft has written, the characters tend to either go insane or die. As I mentioned before, the game stays true to the stories.

This game is not for everyone.

Cthulhu Mythos stories are classic battles of good and evil with good often taking it on the chin. Like many stories in the horror genre, they go deep into cult worship and insanity. Those who don’t understand Lovecraft or don’t like horror stories would probably not enjoy this game. Though this game is not as graphic as the stories, faint-hearted or particularly religious players should stay away. The music may be frightening enough to cause nightmares and the content is so weird that it might perturb players who don’t like the horror genre.

Other than the content of the game, it plays very well. The artificial intelligence is amazing. I cannot tell you how many times I have been beaten by the computer even at a low level. This is a double-edged sword: You feel challenged by the game but sometimes you can get frustrated by constantly losing.

Even though you can sometimes see that there is a pattern in play coming from the game, other times you will be wondering if you are playing against another person. Challenge mode only makes this harder. In this mode, you play with a “handicap” (for example, you play with lower hit points than the computer).

I thought this game deserves four out of five stars from the point of playability, economy (because it is free) and perspectives.

If you want to contact me to discuss this or other games, go to Mercyhurst Game Geeks on Facebook.com.