Hurst to honor veterans with ‘mega-observance’ 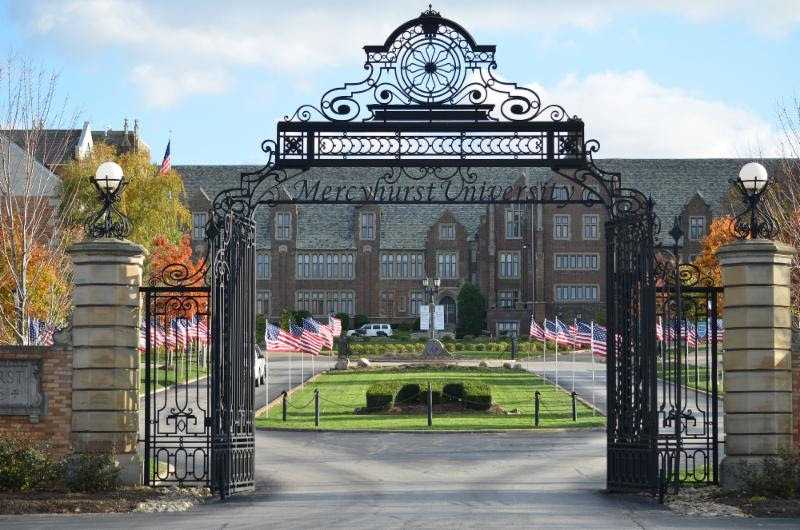 It is typically a tradition for Mercyhurst University to make quite a display for Veterans Day.

2018 will be the third year that Mercyhurst hosts a Veterans tribute, which in years past has seen Old Main Drive lined with numerous American flags and a patriotic display at the Saturday football game. This year, though, the school is preparing to have a weeklong tribute in what is being referred to as a “mega-observance.”

Each weekday of the Veterans Week is set to have a flag raising held at 8:45 a.m. as well as a flag lowering in the evening.

“We have a series of high visibility events, to include raising and lowering the flag to the corresponding Army bugle calls, that will move the ROTC program more prominently into the minds of the Mercyhurst faculty and students,” said CPT Brandon Utykanski, of the Mercyhurst Pride of PA ROTC Battalion. The Cadet Battalion Commander wants to do high visibility, low impact things that can get the ROTC program into the minds of the faculty and the students a little more.

The week will also feature a Cadet Cadence run on Nov. 7 and Nov. 9, with the Mercyhurst ROTC Pride of PA Battalion. Cadence runs will be open to all in the Mercyhurst community who are interested, and will not be as intense as normal cadence runs. Anyone who as ever wanted to run and sing along with the Army is more than welcome to join these runs, which start bright and early at 7 a.m. on each of the days. Additionally, there will be T-shirts for the first 50 students who register for the cadence runs.

Anyone familiar with Mercyhurst knows of the bell carillon that plays the alma mater at 2 p.m. and Christmas music throughout December. For the Veterans Week, though, the carillon will play bugle calls that would typically be played at a military installation. The calls are scheduled to run from Nov. 7 to Nov. 10 for the entirety of the tribute. Such calls are expected to be met with attention from bystanders.

“While there’s not a large installation in the area, there’s definitely a lot of retired service members and family members,” said CPT Utykanski. “I hope that the veterans community get to see how important it is to the ROTC cadets to carry on the traditions they have established in previous generations of service.”

On Nov. 7, a special ceremony will mark Mercyhurst’s designation as a Purple Heart University, a distinction only held also by St. Joseph University in the state.
Thursday features a “Celebration of Valor” from 3:30 to 4:30 p.m. that will be emceed by Ridge College Dean Duncan McGill, Ph.D.

On Nov. 9, there will be a mess hall-themed dinner for students to experience. You can expect a host of meals and servings that will emulate what service members have as their dining options.
The week will be capped off with veterans events Nov. 10 at the football game between Mercyhurst and Millersville University. There will be a tailgate party, as well as a full barbecue buffet (free of charge for veterans). The Mercyhurst Marching Band is set to also perform a veterans tribute consisting of songs and themes for each of the United States’ Armed Forces service branches during halftime at the game.

“The flag flies every day on my porch,” said Mercyhurst Marching Band director Bob Reid. “My relatives were all Navy.”

A list of the Veterans Week events can be found on fliers posted in many buildings across campus.

“Having all of these military events during Veterans Day weekend is a true reflection of the recognition and appreciation Mercyhurst University has for those serving our country whether it be students, employees or community members,” said Ron Swift, LTC (retired) and Assistant Veterans Services Coordinator.

Swift sees great value in honoring veterans in such an outward way at Mercyhurst and feels that it sets a positive example for students to carry on such traditions.

“This starts at the top and demonstrates the importance of veterans and their families and the value each one brings to our university environment. Our students have a very unique opportunity to join in these events that they wouldn’t have on other campuses,” Swift said. “It’s my hope that many will decide to attend these patriotic events to share in the tribute and meet veterans who have helped secure and maintain our freedom.”