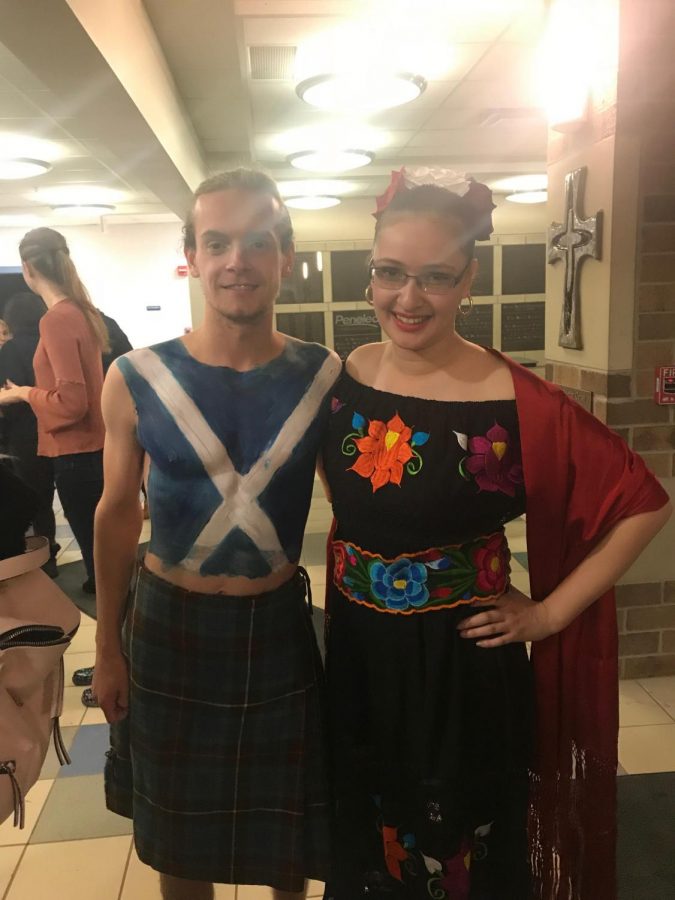 The International Fashion Show is a new event that was held by MAC/SAC programmers this past weekend.

The Multicultural Activities Council and our international student population teamed up to create a celebration of the different cultures on our campus, by celebrating the beauty and style of international fashion.

The event hosted upwards of 15 of our international students to represent their diverse cultures.

Each student was able to choose their traditional dress, jewelry and/or body art to wear down the catwalk.

This show presented the opportunity for these students to represent their cultures to their peers.

Ibukunoluwa Olaoye, a senior Forensic Biology major, was one of the head programmers on the event.

“This is an opportunity for students that are part of the minority in the Mercyhurst community to showcase aspects of their multicultural lives. We are not only giving them the platform to share their traditional clothing not ‘suitable’ to life here in Erie, but also the music and dance aspects of their culture,” Olaoye said.

As well as clothing, the intermission of the show featured a performance of international music from the Music department and dancing from Bhutanese Mercyhurst students. Fashion Merchandising major Yosel Nadik and Communication major Tashi Choden performed the energetic dance before the second half of the show.

“Seeing traditional dress from different cultures can remind us that our international peers come from cultures with long, rich histories that should be respected and celebrated,” Phillips said. “This was a truly fabulous event for the community.”

The students who took part in the show walked the catwalk in their colorful and striking clothing.

Olaoye also had the opportunity to walk in the show herself in clothing from her home country of Nigeria.
Other countries represented included Bhutan, Nepal, the Dominican Republic, Mexico and Ireland.

Each student who walked provided a fun fact about themselves and their country. For example, Michael Nunez, senior Communication major from the Dominican Republic, told the audience about his fashion line, Emdee Clothing, while Fraser told the crowd that he has seen the Loch Ness monster twice.

Justin Rupple, nationally renowned comedian, emceed the show. Rupple read the biographies of each student modeling in the show as well as providing comedy in between sets.
Rupple’s announcing and comedic skills brought laughs and enjoyment to the audience, particularly his impression of former President Barack Obama.

Rupple also fashioned jokes about the Pennsylvania weather, Pittsburgh accents and a skit about how people look when they are driving alone.

Junior Hospitality Management major Rachel Vidil explained what she liked about the comedy and show.
“I related to his jokes and I think he made the performance better with his driving skills,” Vidil said.

Throughout his performance there was not a quiet moment. The room filled with laughter and smiles at his jokes and impressions.

Students also really enjoyed the colorful outfits and opportunities to take photos with the models after the show.
Sophomore Biology major Amanda Brodie was one of the audience members who enjoyed the show.

“I truly enjoyed the experience because of the beauty of the outfits and the happiness of those who took part,” Brodie said. “I hope that this event will grow in the future so that more students can take part and be represented.”

Overall, the event proved to be a new example of how we can showcase diversity on the Mercyhurst campus as a parade of the international beauty that students have to offer.