Veterans Week honors all those who have served 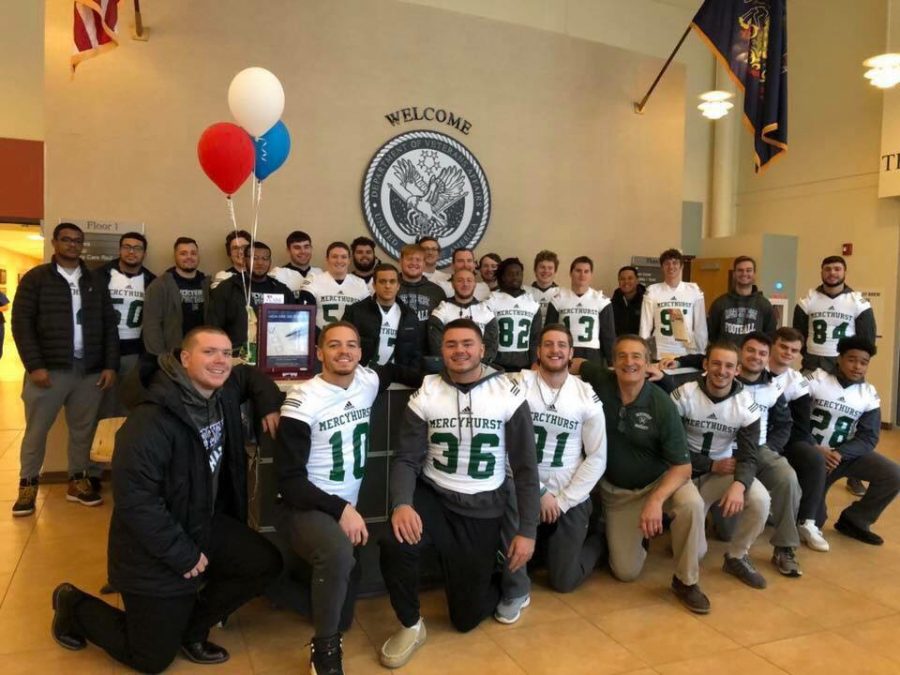 During the week of Nov. 7-10, Mercyhurst Lakers took time to honor, celebrate and remember those who serve as part of Mercyhurst’s annual Veterans Tribute.

According to an email sent out by President Michael T. Victor, this was the most expansive campus observance in recent history, with numerous ceremonies and events packed into each day of the week.

Beginning on Nov. 7, students were invited to join ROTC cadets at 7 a.m. in a three-quarter-mile cadence run around campus.

Beginning at Tullio Field, civilians ran in formation with the cadets, singing along to traditional cadences. A second event of this nature was held at the same time Nov. 9.
“As someone who has never really had that close of a connection with the military or Veterans Day, it was cool to meet and run with the ROTC cadets,” sophomore psychology major Allison Christopher, said.

“Everyone was super pumped about the run and very encouraging towards the non-ROTC participants. I thought this was a really cool way to start the four-day veterans tribute that Mercyhurst put on this year.”

Later Wednesday, a ceremony was hosted in honor of Mercyhurst’s recognition as a Purple Heart University by the Military Order of the Purple Heart. Mercyhurst is one of only two Pennsylvania universities with such distinction, earning the title for its effort in serving veterans and honoring servicemen and women in the community.

Among those in attendance were 15 award recipients, numerous veterans, news networks and commander of Military Order of the Purple Heart (MOPH) Chapter 197 Erie, Bob Hill.
“It was a well-planned and heartwarming ceremony,” MSIII Joshua Slawatycki said. “The thing I enjoyed most about the ceremony was listening to the veterans’ stories about the things they went through and had done. It was an eye-opening experience hearing some of that stuff.”

On Nov. 8, the school hosted a Celebration of Valor, recognizing the sacrifices of veterans, Prisoners of War and those Missing in Action.

“The food was pretty similar to what I ate at the d-fac at Fort Knox this summer,” MSIII cadet Shawn Titus said. “Normally, it’s canned food that’s easy to store.”

The week concluded with a National Anthem Tribute on Nov. 10 at the Mercyhurst vs. Millersville football game. Though snow covered the ground, a small group of cadets still participated in a military tribute with a giant flag across the football field.

Outside of the daily events, a series of 13 bugle calls could be heard from “First Call — Start to Day” at 7 a.m. to “Last Call — Taps” at 10 p.m.
This was an idea that was implemented this year by President Victor.

“Bugle calls have been an important tradition to the U.S. Army since its inception, dating back to pre-Revolutionary War times,” Victor said. “By including this traditional ritual in our observance, we seek to remind everyone of the sacrifices our soldiers make every day and ask for blessings upon them.”

Titus further explained the tradition of bugle calls.
“If we’re in uniform we’re required to stop and face the flag and salute when we hear the bugle calls,” he said. “It’s used as a sign of respect for the flag and for those who serve or have served our country.”

This tradition seemed to summarize the true intent of the Veterans Tribute: respect and remembrance.

“Veterans Week is important for Mercyhurst to recognize because there are millions of men and women who have willingly put their lives on the line for the safety and well-being of our country,” cadet Elizabeth Orlando said. “They deserve to be celebrated and shown respect for their bold and humble decision to be part of something much bigger than themselves.”
Slawatycki expanded on this.

“Personally, I believe it is important to host something like Veterans Week because I do not think veterans or service members receive the support or gratitude they deserve. Other celebrations have entire months dedicated to them, (while) veterans have one day,” he said. “Without the sacrifices made by the brave men and women from 1776 to the present, those other celebrations would not exist today.”