Lakers get active to feed the needy 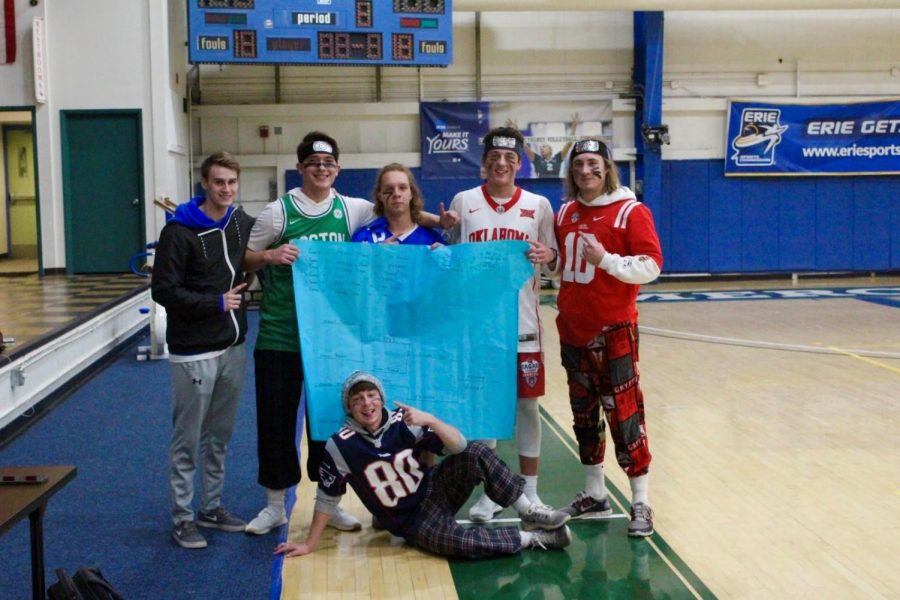 On Nov. 16, a Mercyhurst charity dodge ball event was held by a group of three Resident Assistants (RAs) to raise money for the Second Harvest Food Bank of Northwest Pennsylvania.
The tournament was led by RAs David Steets, Raejonna Pascarella and Grayson Taylor, who serve the freshman area.

The event was held in the Mercyhurst Athletic Center and was open to all members of the campus community.

“The event was created to raise money for the Second Harvest Food Bank to provide food for families in Erie who are not able to easily afford a Thanksgiving dinner,” Steets said. “Each player participating had to donate either $5 or three canned goods.”

Six teams registered to play, and each team needed five to seven players to qualify for a place in the tournament. The teams came up with their own names and uniforms. Outfits included tropical shirts, while another was wearing all black and another wore sports jerseys.

Each team was played another team at random for the first round. A bracket system was set up to see which teams would advance in the tournament.

Over 40 students came out to watch or play in the tournament and get involved in the fun. Katy Vaccariello, a sophomore Fashion Merchandising major, was a player for the team wearing all black.

“I went to play dodge ball to support my friend who set the entire charity tournament up. It was a wonderful time playing with my friends, as well as interacting with other students in a cheerful way. I would definitely do it again,” Vaccariello said.

The teams that were not playing sat in the bleachers and cheered on their fellow students.

Kristian Trebilcock, a sophomore Sustainability Studies major, was on the tropical T-shirt team.

“Overall, the event was a lot of fun. I had never been to something like that before, but it was something that you could make as fun as you wanted. There were a lot of good team themes, and that definitely made everything more enjoyable,” Trebilcock said.

When he wasn’t on the court, Trebilcock was amping up the crowd with the wave and other cheers to support the teams.

When the final match began between the tropical team and the jersey team, everyone was on their feet. After an intense final game, the team wearing the sports jerseys won the tournament.
While the satisfaction of winning was the main prize up for grabs, the organizers also gave bookstore hats and Sheetz gift cards.

That being said, the real winners were the RAs who raised $120 for the Second Harvest Food Bank and collected 30 canned goods for families in need.