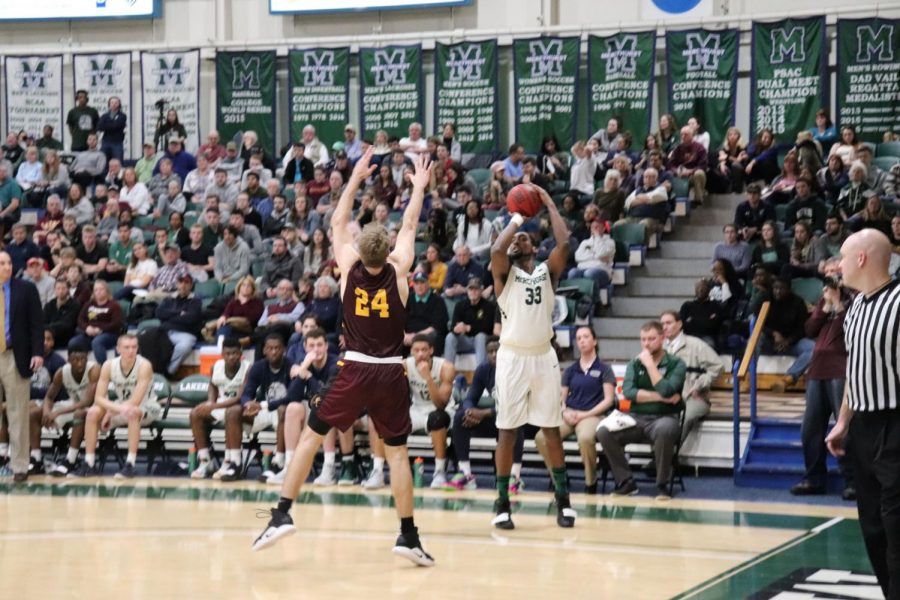 The Lakers’ No. 33 Patrick Smith aims to shoot as Gannon University’s Joe Fustine moves to block. The Lakers were victorious with a 51-35 finish, taking home the 2019 Porreco Pride of Erie Cup.

The Mercyhurst Lakers men’s and women’s basketball teams were both victorious over their downtown rivals the Gannon Golden Knights in the Porreco Pride of Erie Cup.

The Mercyhurst women’s team got the Lakers off to a great start in the fixture by posting a 72-66 victory over the Golden Knights.

Despite trailing for a large portion of the first half, the Lakers were able to go into the break leading by 2 points in a closely contested matchup. In the second half, the Lakers managed to hold off the spirited challenge of the opposition to close out the victory. They managed to come up with key defensive stops at the right times and were clinical at the other end of the court.

“In the second half, we started communicating better on defense and we were able to execute on the offensive end to keep the lead,” junior Lauren Lapertosa said. “Down the stretch, we played smart and composed, so we were able to come away with the win.”

The Lakers were led by Amber Renz and Emily Shopene, who each scored 14 points. Renz was also awarded the Game Changer award for the most influential player on the court.

In the second matchup at the Mercyhurst Athletic Center, the men’s team defended extremely well from the start in an intensely fought game. Through 15 minutes of play, the Lakers limited their opponents to just 5 points and ultimately led 27-15 at the half.

Senior Patrick Smith credited the “good defense throughout” despite their own “offensive struggles” and gave a special mention to teammate Edvaldo Ferreira who provided the “much needed spark when he came in.” Into the second half of the game, the Lakers were able to keep their rivals at bay and limited their offensive rebounds as one of the keys to victory. The players also highlighted the “brilliant scouting report” by Coach Manchel that helped them massively on the defensive end of the court while Jason Massey was able to keep up his tremendous scoring efforts, adding another 15 to his season total.

The game ended with a 51-35 score line, which was also the largest lead of the game. Senior Nelson Maxwell praised the support that the team received from the Hurst community. “We appreciate the whole school coming out to support us,” Maxwell said. “And it was great to have a solid fan base there, and we hope that you guys are able to come to more games.”

Women’s basketball is 8-13 entering their matchup against Clarion University at the Mercyhurst Athletic Center. That game is Feb. 6, with a start time of 5:30 p.m. The next opportunity to see the Lakers men’s squad at home comes also on Feb. 6 when they host Clarion after the women. That 7:30 p.m. game will be another vital PSAC match up for the Lakers. The men’s basketball team currently is 15-4, and have won seven games in a row. Clarion is 7-14 for women’s basketball and 4-14 for men’s.