A prescription for dating 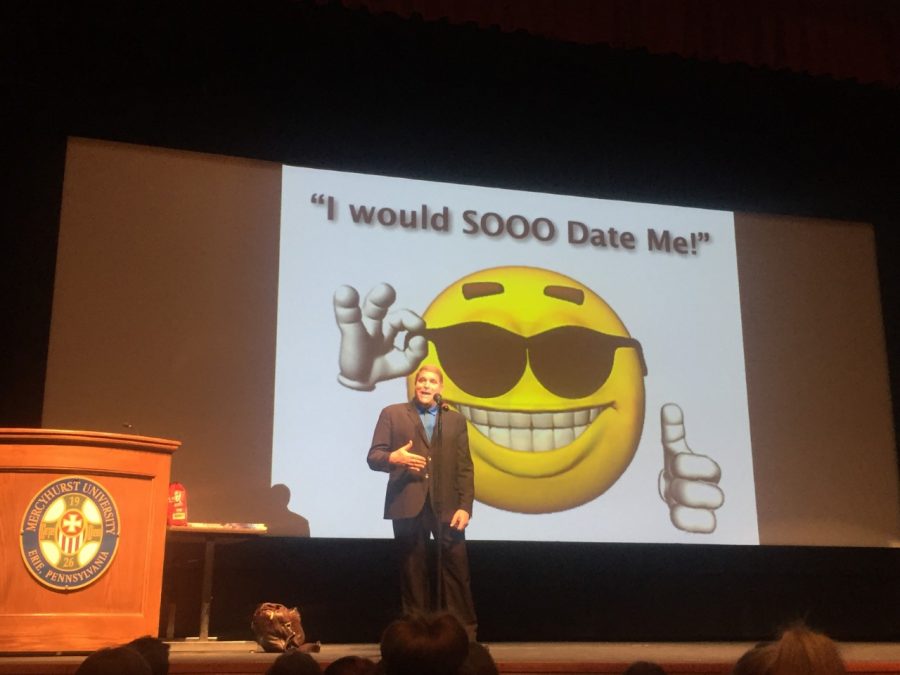 On Feb. 4, MSG invited relationship consultant David Coleman, the “Dating Doctor,” to speak about dating, relationships and love at the Mary D’Angelo Performing Arts Center as the second installment of the MSG Speaker Series.

Coleman provided an interactive, honest and inclusive environment for his audience as he talked about relationships, intimacy and self-love. Coleman stated that his purpose for giving advice on relationships to the students of Mercyhurst was to impact the lives of the people in the room with his mission.

One of the first pieces of wisdom Coleman offered was that “You won’t find the right person until you’ve become the right person.” He encouraged students to tell themselves that self-doubt and lack of confidence would stop today.

“No one is out of your league unless you’ve convinced yourself that they are, and if you’ve done that, then they already are,” Coleman said. “Successful relationships begin with the proper mindset.”

Throughout the night, Coleman shared his theories on attraction and healthy relationships. He began by explaining the “Hmm Theory,” which is a when one sees another person they find attractive at first sight, causing them to say “Hmm.” People may never have the courage to talk to their “Hmm,” but he encouraged the audience to “be the Fat Penguin” and break the ice.

Another theory he shared was the Puppy Theory of Relationships, which equates relationships and respect to house-training a new puppy. One will metaphorically poop on your floor unless you train them that it is not OK. He used this analogy to explain that it is the person who is least invested in the relationship that is in control, much like the puppy. It is up to the other person to show that the negative behavior is not acceptable for the relationship so they stop doing it.

The audience also received several acronyms for successful relationships such as the ABCs of Initial Interest, T.R.I.P.C. and D.A.T.E. The ABCs stand for Attraction to others, Believability of other’s sincerity, Chemistry, which is all types of attraction except for physical, Desire to know the person and Energy spikeage or drainage. T.R.I.P.C. lets one know the five aspects to a healthy relationship and D.A.T.E. allows one to “DATE” their way through a bad break up.

Lastly, Coleman shared helpful tips, tricks and signs to look for when discerning whether a relationship is healthy or not. One tip he gave is if someone is attracted to someone, spend one hour of social time with the person because with the wrong person the hour will drag on and on, with the right person, the hour will fly by. If the two people are right for each other, one hour will leave both parties wanting more. He also gave six subtle signs to tell if someone is interested, as well as four major online dating mistakes to avoid. Most importantly, Coleman provided his advice on red flag signs that will most likely lead to an unhealthy relationship.

Coleman is a 14-time honored National Speaker of the Year as well as the only speaker to ever be honored as the National Entertainer of the Year. Coleman has also been featured in People Magazine, the New York Times, CNN and FOX. Among his other achievements, Coleman is also known as the real-life “Dating Doctor” that inspired the 2005 movie “Hitch” starring Will Smith.