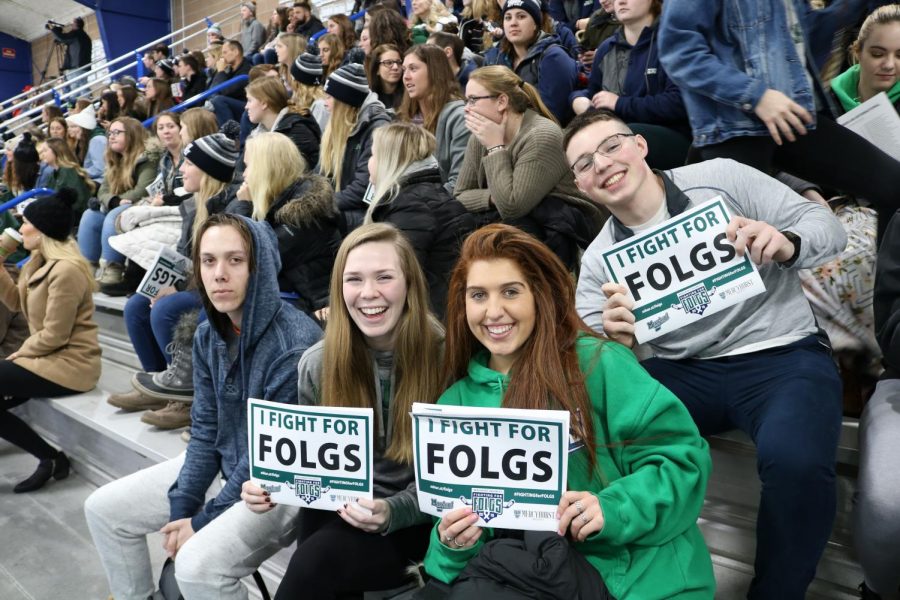 Students show their “I Fight For Folgs” signs at the men’s hockey game on Saturday Jan. 26

Mike Folga is certainly not alone in his fight. Nor is anyone else battling cancer.

Such was the overarching theme and message Jan. 26 at the Mercyhurst Ice Center, arguably one of the biggest events for the Mercyhurst hockey programs in seven years. Uniting the entire Laker community via a well-coordinated effort on all sides on a day nearly two months in the making, a bustling afternoon put a bowtie on the massively successful “Fighting for Folgs” fundraiser and culminated in what many believed to be a fantastic experience.

“I think Mike … has made an impact on this whole campus,” men’s ice hockey head coach Rick Gotkin said. “I can tell you, just in our little world of men’s hockey, he’s made a tremendous impact. He’s an absolute great guy, our players love him, we as coaches love him. He’s made a tremendous impact, not just here with our hockey programs, but he’s made a great impact all throughout campus and even into the community of Erie and beyond.”

The fundraiser was the brainchild of new athletic director Brad Davis, in office since July 12, who initially proposed the idea of a GoFundMe or a game but was ultimately found a weekend where both teams were playing at home — the women vs. Lindenwood and the men vs. American International College — allowing the fundraiser to gain momentum. According to Gotkin, Folga’s friend of two decades and coworkers for the program since 2001, the women’s program was also united in the effort as it stemmed from them also playing at the Ice Center on Saturday, recognizing the large amounts of “moving parts” that needed to come together and ensure the event was successful. The program and several other organizations then brought the idea to the attention of the SAC/MAC committee, who were responsible for organizing events and donations and also able to change the date of a pre-planned cancer fundraiser to match the date of the Lindenwood/AIC doubleheader, the crux of the fundraiser, according to Gotkin.

Folga, Mercyhurst’s longtime hockey equipment manager, spent 11 years in the NHL after graduating as a Laker, serving as equipment manager of the New York Rangers for their run to the Stanley Cup in 1994. Folga was diagnosed with leiomyosarcoma on Nov. 21, and was on hand Jan. 26 with his family for two pregame ceremonial puck drops, both involving the teams’ captains with special mention for AIC player Eric Otto, also battling cancer.

Both ceremonies also featured a poignant moment of silence for victims of cancer, with fans instructed to display an “I Fight for Folgs” placard on the back of their programs.

Elsewhere on campus, Parkhurst hosted a soup crawl in the Athletic Center, while Student Government representative Grace Siwinski was able to bring a local hairdresser for 8-inch-minimum hair donations, with all proceeds again benefitting Folga and the American Cancer Society.  Siwinski was inspired by a similar event at Lancaster High School near Buffalo, where the hairdressing represents solidarity for those affected by cancer.

“A lot of people with cancer may be going through treatment that make them lose their hair,” Siwinski said. “It shows that just because they lose their hair, they’re not weak, they’re not in this battle alone, we’re with them together in this battle. From a MAC/SAC standpoint, I hope (this campaign) shows that every organization on campus right now is fighting with (Folga), and it’s not just the hockey teams, everyone here is in support of him because we’ve all been touched by someone with cancer.”

The fundraising spilled over into the McCormick Strength and Conditioning Center, where simultaneous silent and Chinese auctions occurred during both of the contests. A testament to Folga’s NHL career, the program received donations from all areas, with no fewer than 12 signed jerseys up for auction stemming from the likes of Wayne Gretzky, Ryan Shazier, Evgeni Malkin, Alejandro Villanueva, the entire Predators and Canucks organizations and three jerseys with the design of the women’s game uniform.

“It felt great to contribute to such an important cause and we really felt like we were making an impact,” Student-Athletic Advisory Committee representative Abigail Vietmeier said. Initial reports from Hurst Athletics indicated a combined attendance of more than 3,500 for the two games, leading several fans to seem very impressed by the entire organization of the event from a consumer standpoint.

“It was really exciting,” said sophomore lacrosse player Megan Fitzpatrick. “I think it was for a good cause, and a lot of people from the Mercyhurst community came out and supported.”

A postgame meeting involving both teams at center-ice after an 8-5 AIC win ended the festivities Saturday night and allowed for an overall message moving forward.