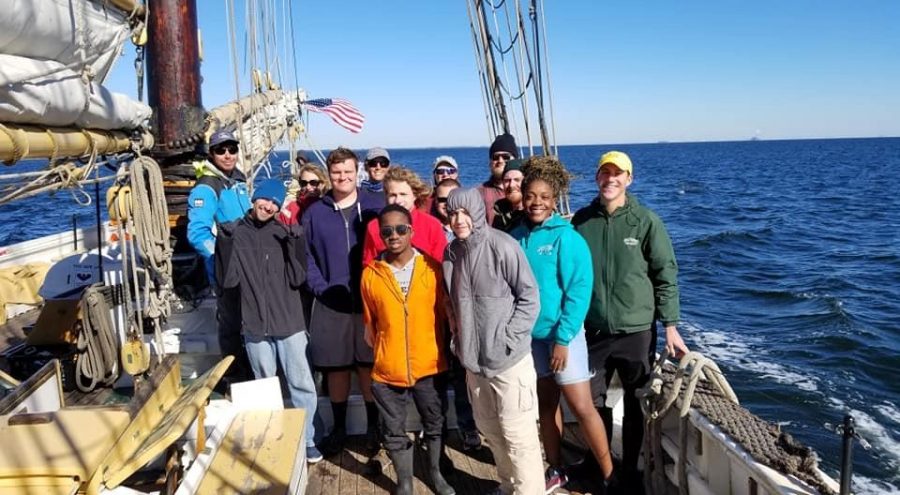 Over winter break of this school year, there were several fun and exciting trips. One trip was specifically for AIM program students to go out and expand their horizons offshore.

This trip took the students out on the water learning something new.

As the year changed from 2018 to 2019, six lucky AIM students were sailing on the Lettie G. Howard along the coast of Florida with four student and staff chaperones. The Flagship Niagara crew joined the students for this incredible excursion.

The opportunity was open to all AIM students and is part of the regular opportunities planned by the director of the program, Bradley McGarry. He chooses a variety of vocational experiences to present to the students so they have a variety of experiences during their college life.

This specific vocational experience was influenced by the recently introduced Brig Niagara class taught in May by Ben Scharff, Ph.D., assistant professor of History.

The trip was a partnership with the Flagship Niagara League, which operates the Lettie G. Howard, and is an example of the ways Mercyhurst has been working to increase the number of collaborative programs offered for the students of the school.

Once the group joined the crew on the ship, there was no getting off, except for two land excursions taken when stopping for port calls.

While on the ship, every student on the trip was welcomed into the crew as a fully functioning crew member. The new crew members were responsible for several important tasks, including standing at the helm to steer the ship, standing lookout overnight, sail handling and hourly boat checks. This last station was the greatest responsibility because they were watching for any water intake that would cause the ship to sink.

The two stops made were in Key West and Tampa Bay, Florida. There were two other stops that had been planned ahead of time, but the challenge of wind currents slowed the ship down, forcing them to move directly to their end destination.

While stopping in Key West, the students were left to explore on their own and took the time to visit the southernmost point of the continental United States.

For Paul Cohen, a senior History major, Key West held one of the most exciting experiences. He explained his favorite experience was seeing a manatee.
“There was a manatee right next to the dock in Key West. I have never seen a manatee up close in person before,” Cohen said.

Scharff found the funniest moment to be getting the manatee to drink from a hose.
After the day was complete, it was back on the ship to continue sailing. The ship moved to the second port of call in Tampa Bay, specifically St. Petersburg. The two major visits there were the Siesta Keys and the Ringling Museum.

Collin Davis, a sophomore Hospitality Management major, explained that his highlight of the trip occurred here.

“One of my favorite parts of the trip was going to Siesta Key Beach, the number one in the United States, and always seeing the sunrise in the morning when I was not asleep.”

After this last exciting port call came to a close, it was time to drive off to the airport and start the journey home.

In the end, every person walked away with incredible memories and newly developed skills.

When asked about his favorite memory, Scharff said, “For me, the best part was watching the students get on board completely uninformed and by the end being totally involved and newly skilled after the new experience.”

After the success of this trip, the hope of the school is to introduce more sailing programs.

One idea is an alternative spring break trip for hurricane relief, using a ship to sail students directly to the areas unreachable by road transportation.