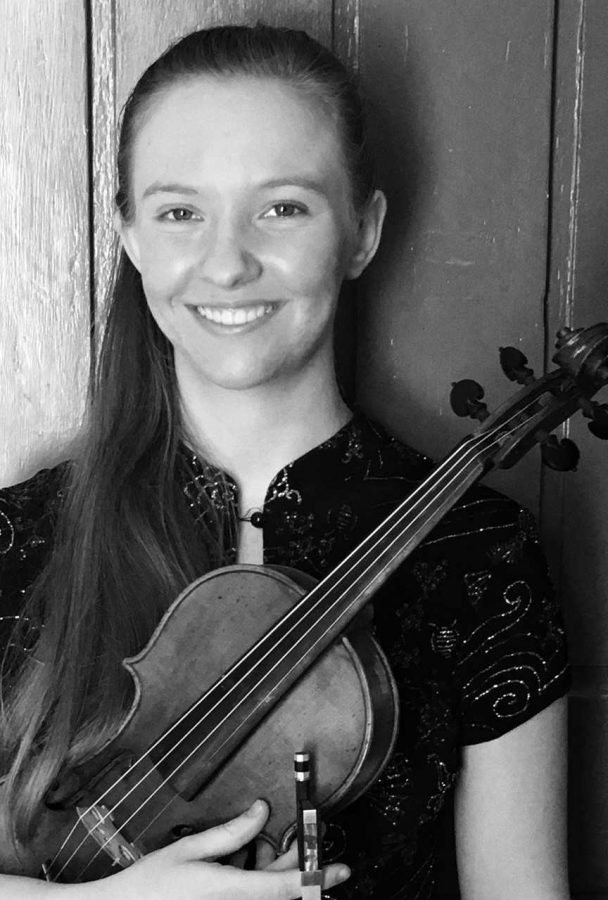 On Dec. 2, 2018, the Mercyhurst Civic Orchestra hosted its third annual Concerto/Aria Competition.
Two winners were announced — Hannah Byard, violin, and Maria Dombrowski, voice.
Byard is a homeschooled high school senior.
The winner of the high school division of the Concerto/Aria Competition, she will perform French composer Camille Saint-Saëns’ Introduction et Rondo capriccioso, Op. 28, alongside the Mercyhurst Civic Orchestra.
“I picked this piece because I found its beautiful and fiery character very appealing and I’ve been wanting to do it for the last several years, ever since I heard it,” Byard said..
Byard began playing the violin at the age of 5 and has played for 12 years.
She has been taught through the Suzuki method, a style of teaching that reformed classical music instruction through its belief that everyone can become a musician through practice, not just those who are naturally talented.
Her past teachers were Sue Tillotson and Joe Kneer, D.M.A.
She now studies with James Reinarz.
Even though Byard has been playing the violin for over a decade, she is still undecided with what she wants to do once she graduates.
“I love music, enjoy playing, and will continue to play for my entire life, but I may not study music in college as it may then become a job/duty instead of something I enjoy,” Byard said.
This was Byard’s first time auditioning for the Mercyhurst Civic Orchestra Concerto/Aria competition.
Her preparations for her solo performance with the orchestra are similar to her preparation for the upcoming concert as a member of the ensemble.
“I am practicing and listening to as many different performers as I can,” Byard said.
Her favorite performer is Jinjoo Cho, who has performed at Mercyhurst in the past for the D’ Angelo Department of Music’s Roche Guest Artist series.
According to Byard, “people should come to this concert as it has many very different and beautiful styles of pieces which are not often performed.”
The second winner is Dombrowski, a senior contract major, who will sing two arias from operas by Mozart.
One of these is the well known “Der Hölle Rache” from “Die Zauberflöte” or “The Magic Flute.”
This aria is sung by the Queen of the Night and is a coloratura soprano aria, a style that features a wide range of notes, flexibility and agility.
Dombrowski was unavailable to comment on the upcoming concert.
The concert will take place on March 17 at 4 p.m. in the Mary D’ Angelo Performing Arts Center. The ticket prices are $5 for adults, and $2 for faculty, staff, students and youth 12 and under.