Mercyhurst alum to give Irish flair to Roost design 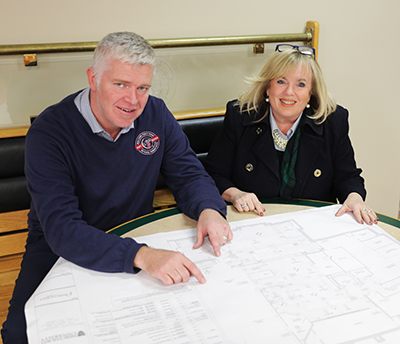 This coming semester, we will experience something new on our campus — our own Mercyhurst pub.

Named The Roost, it is set to open this March. Its name references a chicken coop situated behind Zurn Hall during the 1930s that Mother Borgia Egan allowed a group of young women to transform into a campus lounge, where they would be allowed to smoke.

The students redecorated the coop with proper plumbing, a snack bar and a fireplace. That was the beginning of the Student Union.

Fast forward to 2019, and our Student Union is being renovated once again. Alongside the former Laker Inn, the university is in the process of building and designing The Roost.

To help give the new space an Irish flavor and connect it to the roots of Mercyhurst, alumnus and successful Erie restaurateur John Melody is lending his expertise to the project.

Melody is a graduate of Mercyhurst’s Hospitality Management program and a native of Ireland.
The founder and former owner of Molly Brannigan’s Irish Pub in downtown Erie, Melody now owns four U-Pick-6 establishments across Erie County.

Melody has been involved in the life of Mercyhurst and the greater Erie area since moving to Mercyhurst in 1986 to play soccer. He has since worked at the university and is now making his mark in a different way with his designs.

Melody will be choosing a design that reflects the Irish heritage of Hurst and will be adding elements of tartan, plaid and leather for a cozy college atmosphere.

The pub will be open to all guests, but will only serve alcohol to those age 21 and older.
In a press release from the university, President Michael T. Victor explained what he sees as the advantages of the pub.

“I see a number of advantages, foremost among them, student safety. Having a pub on campus could deter students from drinking and driving; reduce the opportunity for drinks to be spiked or drugged, and provide more direct oversight of potentially dangerous behaviors like binge drinking.”

There will be seating for 50 to 60 people inside the pub, with various beers on tap and a full food menu.

“I was hired to design the pub, and it’s going well,” Melody said. “I’m delighted to be a part of it. We have been able to incorporate some salvage pieces from Ireland into the design. I’m very excited to watch it develop into the vision that Mercyhurst has, and I’m confident that the unique Irish feel will fit well into campus.”

Melody also said that other unique features of the space will include imported parts on the back bar and the use of Irish décor pieces and stained glass throughout the pub.

MSG President Vincent Marrazzo said that this is going to be a great way for students to meet and hang out in a new location on campus.

“I think it will be a really unique experience for students, something that isn’t offered by other colleges or universities in the area,” Marrazzo said.