Hurst goes beyond the gates 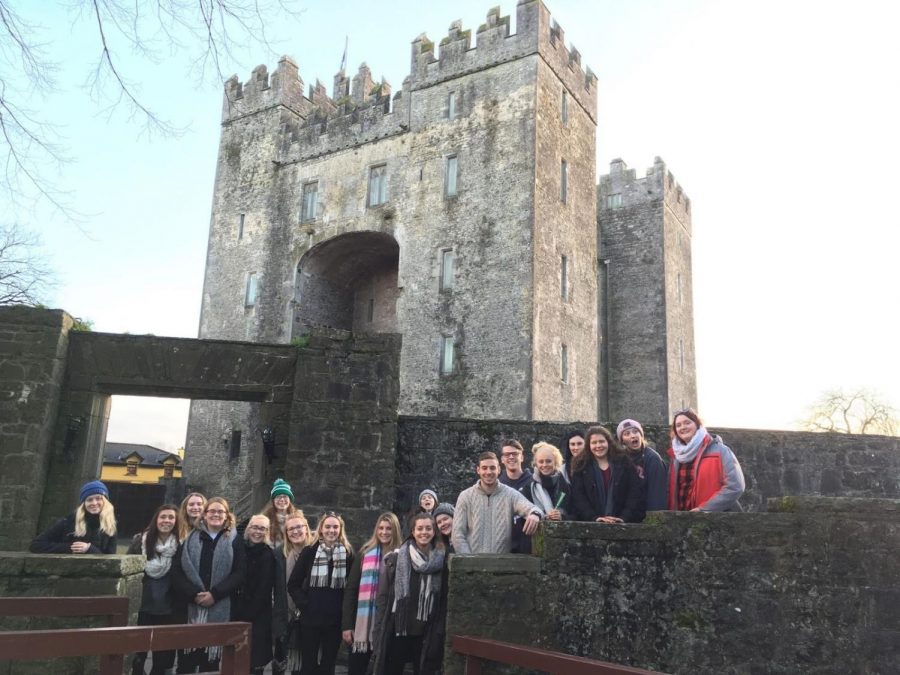 Over winter break, some Mercyhurst students and faculty members spread their cultural wings.
Under the Mercyhurst Study Abroad program, two groups embarked on trips to Europe. One group spent their 11-day journey taking in the ageless beauties of Italy and ancient Greece. The second group spent their nine-day trip exploring the history of Ireland.

The Italy and Greece group took off from Buffalo Niagara International Airport to land in the city of Florence. The first activity was a walking tour, followed by a day spent sightseeing. One of the first sites was the Duomo and Santa Maria del Fiore Cathedral.

Following the few eventful days in Florence, the group took off on a bus to the capital of Italy, Rome. They also managed to make a short stop in Tuscany to sample some of the delicacies: chocolate, coffee and wine.

Before the trip to Greece, there was also time for the Colosseum and St. Peter’s Basilica in Vatican City. By the last day in Italy, there were a few important architectural landmarks left to see, including the famous Trevi Fountain and the Spanish Steps.

For tour supervisor Heidi Hosey, Ph.D., dean of Global Programs and Experiential Learning, there was one clear highlight. In the city of Ostia Antica, the group visited the famous Roman theater ruins.

“We had the site almost to ourselves, and it was a magnificent sunny day. At the ruins of the theater the students stood on the center stage platform and sang, and the rest of us at the top of the seats listened to incredible acoustics designed and still perfect after nearly 2,000 years,” Hosey said.

After the visit to Italy was completed, it was time to take flight to Athens, Greece. The first stop was Delphi to see the famed Oracle and the ruins of the Temple of Apollo. Soon enough, the group was back to Athens catching a glimpse of the Pantheon.

This was followed by a visit to the Temple of Athena Nike and the Olympic Stadium. The last day was free time, which many took as an opportunity to see the Theatre at Epidaurus, Cape Sounion or the Temple of Poseidon.

Meanwhile, the group that traveled to Ireland began their adventure in Dublin. While in the capital, they took in the picturesque sights and sampled the delightful food and drinks offered by the city.

The Ireland group was given the opportunity to tour an active medium-security prison, Mountjoy, which was an incredible experience for the Criminal Justice students on the trip. It was also a great complement to the courses the students took in preparation for the trip.

Following the day at the prison, the students took the long drive to Northern Ireland for two individual trips. One day was spent experiencing the city in a black cab tour of the Catholic and Protestant murals that divide neighborhoods. The second day in Northern Ireland was spent on the scenic side visiting the Giant’s Causeway and Carrick-a-Rede Rope Bridge.

The group moved to Galway and western Ireland as their next stops, visiting the 6th century monastery of Clonmacnoise, the Cliffs of Moher and a 13th century castle.

Jordan Kessler, a sophomore Intelligence Studies major, particularly enjoyed these parts. “My favorite memory was visiting the Cliffs of Moher,” Kessler said. “The scenery was breathtaking and a once-in-a-lifetime experience.”

At the end of both trips, each individual left Europe with a whole new experience.

Jacob Tretinik, a junior Biology major who traveled to Italy and Greece, had plenty to say.
“The most exciting part about the study abroad experience, regardless of where you go, is the opportunity you have to be exposed first hand to the cultures of the world,” Tretinik said. “Learning about history, traditions and society over all of a country, besides your own, is a humbling act that I am truly blessed to have been a part of for Italy and Greece.”

For Averill Earls, Ph.D., assistant professor of History, the most enjoyable part of the trip to Ireland was “every moment with these students.”

“I think seeing their awe and appreciation for the prehistoric stops – the Causeway, the dolmens and the Cliffs – was pretty special,” Earls said. “And their enthusiasm came through in those moments most, like when they spelled out Mercyhurst with their bodies at the Giant’s Causeway.”